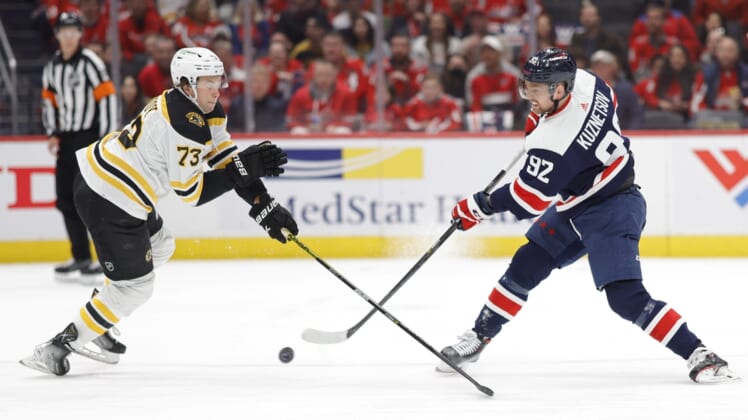 The Washington Capitals scored two goals in both the second and third periods to edge past the visiting Boston Bruins for a 4-2 win Sunday.

Lars Eller lifted Washington to a 3-2 lead at the 7:18 mark of the third period as he sent a puck toward goal from the left side that deflected off Haula and past Boston goaltender Linus Ullmark. Captain Alexander Ovechkin ensured the victory with an empty-net goal in the final seconds of regulation.

The win was the third straight for Washington (40-22-10, 90 points). Eller and John Carlson each posted a goal and an assist to lead the offense, while Tom Wilson also scored.

Boston (45-22-5, 95 points) has now lost two of three, despite goals by Curtis Lazar and Erik Haula. Ullmark made 27 stops in the setback.

Carlson got the Capitals on the board 4:11 into the second, winding up for a slapper at the top of the right circle. Conor Sheary took advantage of a turnover and set up the defenseman for the opening tally.

Lazar crashed the net at 7:55 for Boston’s first of two goals in a one-minute span. Nick Foligno set up the play by intercepting a clearing attempt and cutting to the top of the crease.

The score flipped in the Bruins’ favor when Haula ripped a slapper with an assist from Charlie McAvoy in the neutral zone. It was the winger’s sixth goal in eight games.

Wilson knotted the score again at 14:50 as he won a net-front puck battle after Eller’s shot and beat Ullmark five-hole.

Bruins defenseman Matt Grzelcyk left the game with an upper-body injury after playing four shifts in the first period. He appeared to favor his shoulder after pinching on Washington’s Garnet Hathaway along the boards.