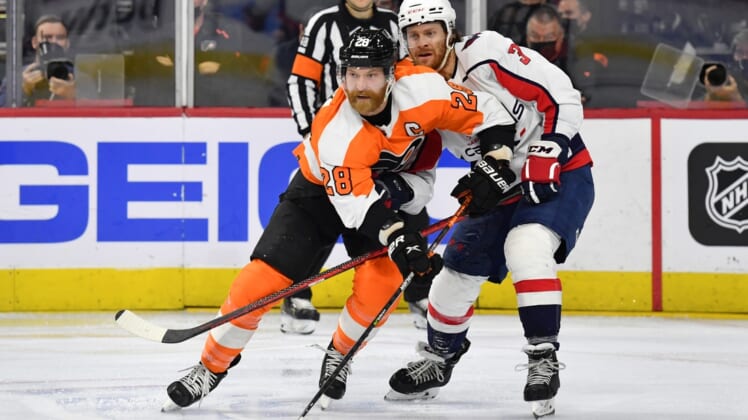 The Philadelphia Flyers look to snap a six-game losing streak when they host the Washington Capitals on Saturday afternoon.

It’s the fourth contest of a season-high eight-game homestand for Flyers, who allowed two empty-net goals and fell 4-1 to the St. Louis Blues on Tuesday.

The recipe for the loss seemed eerily similar as the Flyers stayed close for much of the game before some costly mistakes in the end.

Goaltender Carter Hart missed the last two games with an eye infection, but his return is possible against the Capitals.

“It’s just a stye, so it’s kind of one of those annoying things, but it feels better,” Hart said. “I’ve never had them before until this year, so it’s weird. I woke up Monday and couldn’t really see out of it. Vision’s pretty important to stopping a puck.”

The injury-plagued Flyers — who are missing key pieces such as Sean Couturier, Ryan Ellis and Kevin Hayes, along others — could benefit with Joel Farabee back in the lineup. The 22-year-old Farabee has missed the last 11 games with a shoulder injury.

“I don’t think you can simulate a game in practice or getting hit when you’re not expecting it in practice,” Farabee said. “I think the game will be a good test for me, but I feel really good with my rehab and everything like that. I’m not worried about getting hit or anything. I think that’s the biggest thing, I’m not really thinking about it. Feel good, my body feels good and I’m ready to go.”

The Capitals will look to rebound after a 4-1 loss to the New York Rangers on Thursday.

Washington had won five in a row on the road.

However, the Capitals played well for stretches and fired 37 shots on goal, including captain Alex Ovechkin’s goal.

“I thought we had a lot of chances,” Capitals coach Peter Laviolette said. “Some of them were good looks, chances that you want to get, redirects, partial breakaways, shots right through the slot.”

The Capitals have compiled 16 road wins and 12 at home, making them dangerous as the playoffs approach. With such a veteran team, they’re capable of beating anyone at any arena.

“I don’t think it matters who we play in the playoffs,” Laviolette said. “If you look at the teams, the Rangers are having a really good year. Carolina has been a top team the entire year and Pittsburgh has been always a tough opponent. So no matter what you get in the first round, it’s gonna be a good one.”

Especially if the Capitals continue to get healthy.

T.J. Oshie and Justin Schultz returned to the lineup after being out with upper body injuries. Oshie hadn’t played since Jan. 15.

“Honestly, I felt like my timing and reach for the most part were better than I expected them to be,” Oshie said. “Obviously, the game shape is not there. The stopping, starting — but better than I thought and really happy to be back with the guys.”