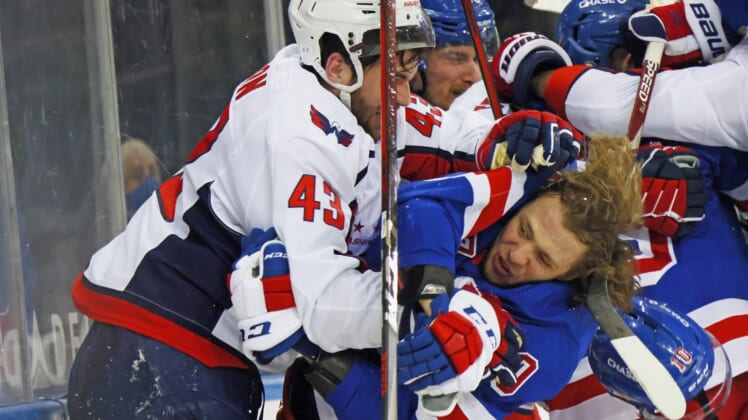 Daniel Sprong scored the tiebreaking goal early in the third period and the visiting Washington Capitals went on to defeat the New York Rangers 6-3 on Monday night.

Sprong intercepted a pass from Rangers defenseman Brendan Smith deep in the slot and tucked the puck in at 4:31. Nicklas Backstrom got behind the defense and added an insurance goal at 11:41, and Tom Wilson sealed the win with an empty-net goal at 18:34.

Nic Dowd, Garnet Hathaway and Wilson each had a goal and an assist for Washington (33-14-5, 71 points), which climbed into a tie for first place in the East Division with the Pittsburgh Penguins. Conor Sheary collected a goal, Michael Raffl had two assists, and Vitek Vanecek made 23 saves.

Mika Zibanejad scored his 21st and 22nd goals of the season for the Rangers (26-21-6, 58 points), who were eliminated from playoff contention. Igor Shesterkin made 34 saves. Kaapo Kakko scored a goal, and Artemi Panarin had two assists before leaving in the second period with a lower-body injury.

The Capitals played most of the game with 10 forwards after Alex Ovechkin, who returned after missing four games with a lower-body injury, left after playing just 39 seconds. Forward T.J. Oshie (personal/family reasons) was out as were forward Evgeny Kuznetsov and goalie Ilya Samsonov (both for team disciplinary reasons).

The Capitals scored two goals in 1:32 late in the first period.

Dowd got behind the Rangers’ defense and put a wrist shot between Shesterkin’s pads at 14:12. Sheary controlled a deflected puck, spun and scored from below the left circle at 15:44.

Zibanejad snapped a shot past Vanecek from the left circle on the rush to pull New York within 2-1 at 18:00 of the opening period. Zibanejad tied the score with a power-play goal from the slot off a centering pass from Ryan Strome at 2:30 of the second period.

Kakko capped a two-on-one when he slid the puck by Vanecek to give the Rangers a 3-2 lead at 4:35 of the second, but Hathaway tied it when he knocked in a rebound at 18:30 of the middle period.