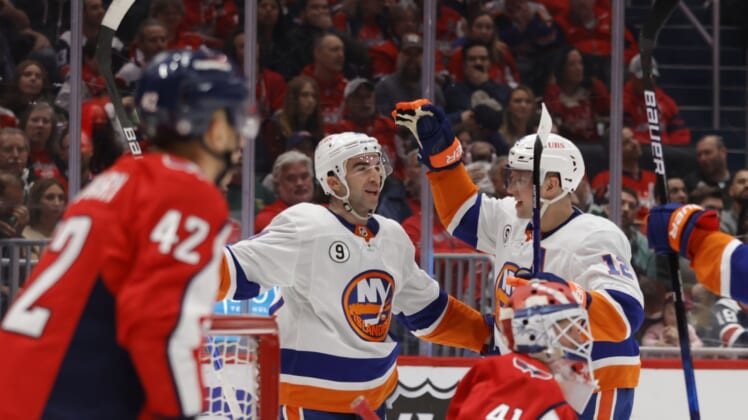 Alex Ovechkin’s 767th goal moved him into sole possession of third place on the NHL’s all-time scoring list, and the Washington Capitals won in the shootout round for a 4-3 victory over the visiting New York Islanders on Tuesday.

With the score tied 2-2 at 15:02 of the third period, Evgeny Kuznetsov won a face off in New York’s end and quickly sent the puck to Ovechkin at the edge of the circle. The star forward blasted the shot past goalie Semyon Varlamov for his 37th goal of the season and his latest mark in the record books.

Only Wayne Gretzky (894 goals) and Gordie Howe (801) sit ahead of Ovechkin on the NHL’s all-time list. Ovechkin had spent the last three games in a tie with Jaromir Jagr at the 766-goal mark.

The Capitals are 5-0-1 in their last six games, with the last three of those games all going beyond regulation. Anthony Mantha scored in the eighth round of a marathon shootout to finally clinch the extra point for Washington on Tuesday.

The Capitals trailed in the third period for the fourth consecutive game but took the lead thanks to its most- and least-experienced scorers. Five minutes before Ovechkin’s tally, Axel Jonsson-Fjallby’s first career NHL goal equalized for Washington.

Just when it seemed as though Ovechkin’s milestone goal would be the winner, Anders Lee tied the score again with 1:59 remaining in regulation.

The Islanders are 4-1-1 in their last six games and missed a chance for their first four-game winning streak of the season.

Kuznetsov had two assists for the Capitals. He has nine points (four goals, five assists) over the course of a six-game points streak.

Mantha had both the deciding score of the shootout and the game’s opening goal, giving the Capitals the early lead at 12:21 of the first period.

Brock Nelson had a goal and an assist for New York, and Noah Dobson had two assists. Kyle Palmieri scored the Islanders’ other goal.

Varlamov and Capitals goalie Vitek Vanecek each stopped 29 of 32 shots.