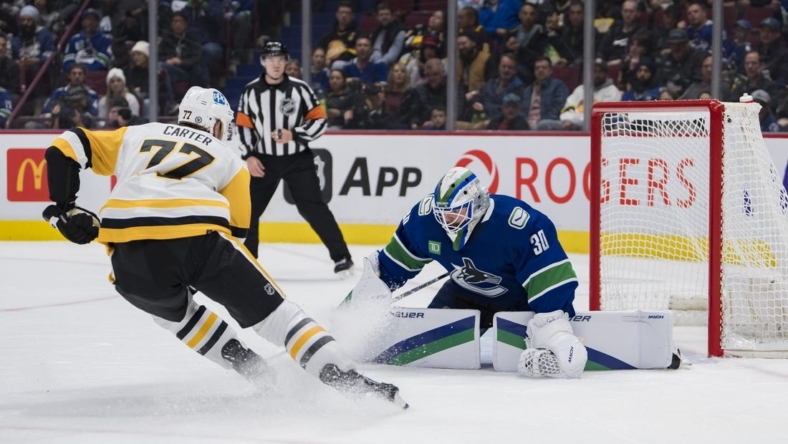 Andrei Kuzmenko and Bo Horvat each had a goal and an assist, and Spencer Martin made 34 saves to lead the Vancouver Canucks to a 5-1 win over the visiting Pittsburgh Penguins on Friday.

After going 0-5-2 in their first seven games, the Canucks have picked up victories on consecutive days. Vancouver got its first win Friday by editing the Seattle Kraken 5-4.

The Penguins began the season 4-0-1, but have lost three straight. They have been outscored 15-5 in those three games.

Horvat and Ekman-Larsson scored on the power play, as the Canucks took advantage of Pittsburgh’s struggling penalty-kill unit. After going 2-for-4 on the kill on Friday, the Penguins have allowed nine goals on 29 opposing power-play chances this season.

Rickard Rakell scored Pittsburgh’s only goal, a power-play effort in the second period.

Martin stopped 34 of 35 shots for his first victory of the season. Martin is 4-0-4 in two seasons with the Canucks, making him the second goaltender to record points in each of his first eight games with Vancouver. The first was Curt Ridley, who went 6-0-2 in the 1975-76 season.

After building a 2-1 lead through 40 minutes, the Canucks put the game out of reach with three goals in the third period. Late-game security has been rare for Vancouver this season, as the team had been outscored 16-4 in third periods prior to Friday’s game.

The Canucks announced a trade with the Carolina Hurricanes prior to the game. Vancouver acquired defenseman Ethan Bear and forward Lane Pederson in exchange for a fifth-round pick in the 2023 NHL draft.