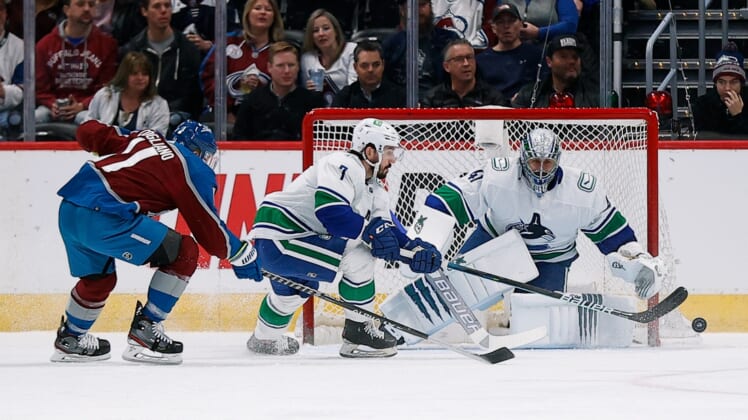 J.T. Miller had a goal and an assist, Bo Horvat and Brock Boeser also scored and the Vancouver Canucks beat the Colorado Avalanche 3-1 on Wednesday in Denver.

Jaroslav Halak had 32 saves and Tanner Pearson added two assists for the Canucks, who had won just one of their previous six games (1-3-2).

Andrew Cogliano, who was acquired on Monday from the San Jose Sharks, made his Colorado debut, but Artturi Lehkonen still has to work out immigration issues before he can play. The Avalanche got Lehkonen from the Montreal Canadiens at the trade deadline.

Both teams had chances in the first two periods but couldn’t convert.

The offenses final woke up in the third period, with Vancouver breaking through. Elias Pettersson stole a clearing attempt along the boards and fed Boeser in the slot. Boeser’s quick shot beat Kuemper glove side to give the Canucks a 1-0 lead at 1:23.

It was Boeser’s 19th goal of the season.

With Colorado applying pressure in the Vancouver zone, the puck came to the top and was picked up by Conor Garland. He skated into the Avalanche end with Miller on a two-on-one and put a shot on net that Kuemper stopped. The goalie wasn’t able to cover the puck, which sat in front of the crease, and Miller knocked it in at 3:15 for his 26th of the season.

The Avalanche answered a few minutes later after Vasily Podkolzin went off for interference. Nathan MacKinnon took a shot on net that Halak saved, but the rebound fell in front and Kadri roofed it for his 24th goal of the season at 6:15.

Colorado got another power-play chance in the third period but couldn’t convert.

Kuemper came off for an extra skater in the final two minutes. Halak made a save on a Mikko Rantanen shot, and moments later, Horvat scored into the empty net at 19:42. It was his 24th goal of the season.