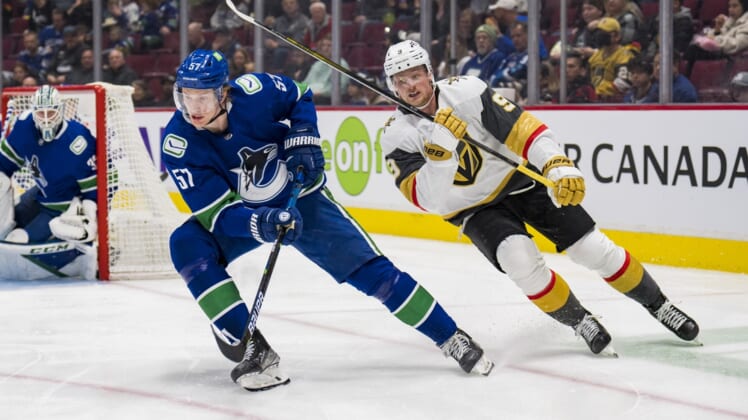 After sweeping a three-game Pacific Northwest road trip to extend their winning streak a season-best-tying five in a row, the Vegas Golden Knights return home to Las Vegas to host one of the teams still battling along them in the Western Conference playoff race — the Vancouver Canucks.

“Big for sure,” Theodore said of the victory, which moved Vegas into the final wild-card spot. “A couple goals that we wouldn’t like to give up, but tie game going into overtime, that’s time to buckle down a little bit, and I thought our guys did a great job.”

“We need every win that we can get,” Vegas coach Peter DeBoer said. “Guys are rallying. They’re digging deep. We’ve got a short lineup almost every night. We’re asking for different contributions from all kinds of different people, and guys are stepping up and giving us that.”

The last four of the five wins during Vegas’ winning streak have come against teams currently below the playoff line, including a road sweep of the expansion Seattle Kraken. After hosting Vancouver and Arizona on Saturday, things get a whole lot tougher for the Golden Knights. They still have road games at Calgary, Edmonton, Dallas and St. Louis as well as a home contest with Alex Ovechkin and the Washington Capitals.

“It’s a playoff mindset for the rest of the year,” center Chandler Stephenson said. “(Sunday’s win) is obviously something to build on. Get home and focus on the next one.”

Vancouver is eight points behind Vegas with a game in hand. But with just 12 games remaining for the Canucks, the margin for error is extremely small and makes the two remaining games with the Golden Knights almost must-wins.

That’s why Sunday’s slow start at home — Vegas scored two goals by Alex Pietrangelo and Jonathan Marchessault in the first 12:31 while outshooting the Canucks 10-1 — so head-scratching.

“We weren’t ready to play,” forward J.T. Miller, who started the third-period comeback with his 29th goal of the season, said. “Obviously (we) played our butts off in the second and third (periods) but it was too late. Like I’ve said a million times, you can’t do that in this league. It’s too hard.”

Making the task potentially even tougher for Vancouver is the fact that right wing Brock Boeser, who left Sunday’s game with an injury, and defenseman Quinn Hughes, second on the team in scoring behind Miller with 53 points (five goals, 48 assists), didn’t practice Tuesday.

Boeser is out indefinitely, while Vancouver coach Bruce Boudreau said Hughes was sick. Boudreau was hopeful Hughes could fly to Las Vegas on Wednesday and still play in the contest.

No matter who is on the ice on Wednesday night, Boudreau said his team can’t afford to get off to another bad start.

“We have to play 60 minutes instead of 50 minutes,” Boudreau. “If we play 60 minutes, we have a good chance. I thought the last two periods (Sunday) — I counted, they had three or four maybe scoring chances. Very easily we should have won in regulation.

“At this stage of the season, if you don’t play for 60 minutes, you don’t get the good results.”