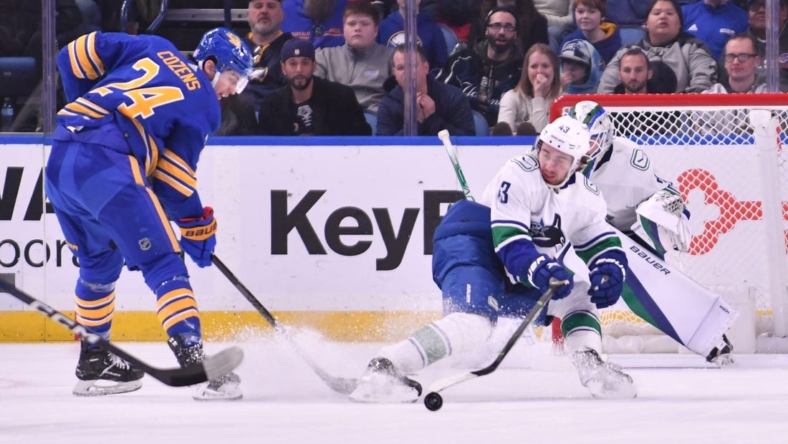 Bo Horvat had a goal and two assists to lead the Vancouver Canucks to a 5-4 road win over the Buffalo Sabres on Tuesday.

The Sabres are 0-6-0 over their last six games, with the last four of those losses coming on home ice.

Horvat has collected multiple points in five of his last nine games. Vancouver’s captain is off to a tremendous start in the 2022-23 season, with 20 points (14 goals, six assists) in 17 games.

Elias Pettersson had a goal and an assist for Vancouver. Dakota Joshua, Ethan Bear and J.T. Miller scored the Canucks’ other goals.

Joshua and Bear opened the scoring with a pair of goals within a 77-second span in the first period, giving the Canucks a lead they would never relinquish. The Sabres continually chipped away, outshooting Vancouver 15-5 in the third period and finishing within a goal after Casey Mittelstadt’s tally at the 12:02 mark.

Alex Tuch had a goal and two assists for Buffalo. Jeff Skinner scored the Sabres’ other two goals and Tage Thompson had two assists.

Vancouver struck again in rapid succession in the second period, as Miller and Horvat each scored power-play goals within a 72-second margin. The Canucks entered Tuesday’s action ranked fifth (27.6 percent) in the NHL in power-play percentage and added to that impressive total by going 2-for-3 against Buffalo with the extra attacker.

By contrast, the Sabres’ struggling penalty-kill unit began the night 27th in the league and continued its issues. Buffalo has allowed at least one power-play goal in each of its last seven games.

Spencer Martin stopped 28 of 32 shots for Vancouver. The win improves Martin’s record to 4-1-1 in six starts.

Thompson has seven points (four goals, three assists) over the course of a five-game points streak.

Tuch matched a personal best for points in a game, hitting the three-point plateau for the sixth time in his NHL career.