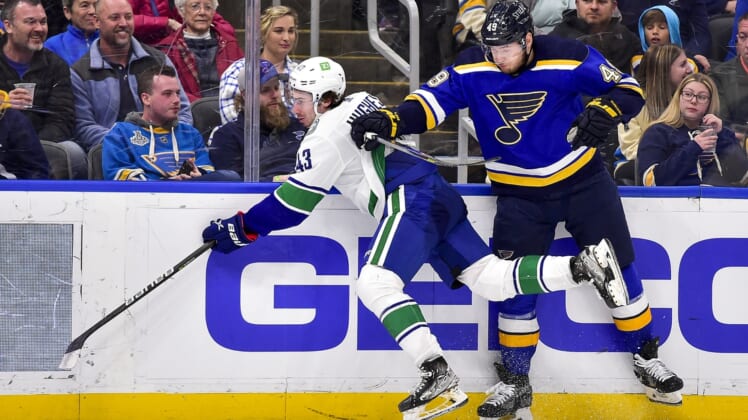 The Vancouver Canucks are not yet in do-or-die territory, but it will be a tall order to keep their slim playoff hopes alive by repeating their last performance when they play host to the St. Louis Blues on Wednesday, the second half a home-and-home series.

The Blues claimed a 4-1 home-ice win in the first clash on Monday, a game in which they staked a 3-0 lead by the opening minute of the third period and were never in danger or relinquishing it.

The Canucks had so much hope when they pulled themselves within striking distance of a playoff position by the first week of March, but have just three wins in their last 10 outings (3-4-3) and have begun to slip further back of the wild-card pace.

“There are no easy games and everybody is fighting for something right now,” said forward J.T. Miller. “Whoever wants it more is going to win.”

The Canucks can look to the fact they outshot the Blues by a 17-9 edge during a scoreless second period of that game, but coach Bruce Boudreau wouldn’t want them to fool each other into thinking it was a good outing beyond the fact they trailed 2-0 after the opening period and couldn’t find the comeback goals.

“I just didn’t think we had enough guys playing with a sense of urgency that’s needed at this stage of the season,” said Boudreau of his team that returns home after a 2-1-1 road trip. “Shoot it on that goalie where he has to make a save. We were hitting him in the chest every shot from great opportunities.

“The first five minutes of the third period they took it to us and we didn’t have the pushback we needed.”

The Blues currently are in a playoff position, but are not on the most solid of footing in the tight-as-a-drum battle that is headed down the stretch. They have compiled a 4-6-3 record in March, even with David Perron leading the attack with 12 goals in that time and Vladimir Tarasenko heating up to become the fifth player in franchise history to collect 500 career points.

A key to those struggles, and a big reason for Monday’s win, was the fact it was the first time in a half-dozen outings the Blues opened the scoring.

“I feel like (the lead) gave the team confidence,” defenseman Marco Scandella said. “I was lucky to be the one to put that one in, but I felt like we came out strong. We had a good third period (the previous) game. It hasn’t gone our way a little bit the last couple games before that. So it was a big response by us.”

The Blues will look for a repeat against a Canucks team against which they have posted a 12-3-2 record against in the last 17 regular-season meetings.

“It’s always important (to get the lead),” head coach Craig Berube said. “If you score first in the game, you’ve got a good feel going, you feed off that. It was nice getting that 2-0 lead. After we killed a penalty in the second, I wish we would have kind of got going the other way a little bit more than we did.”