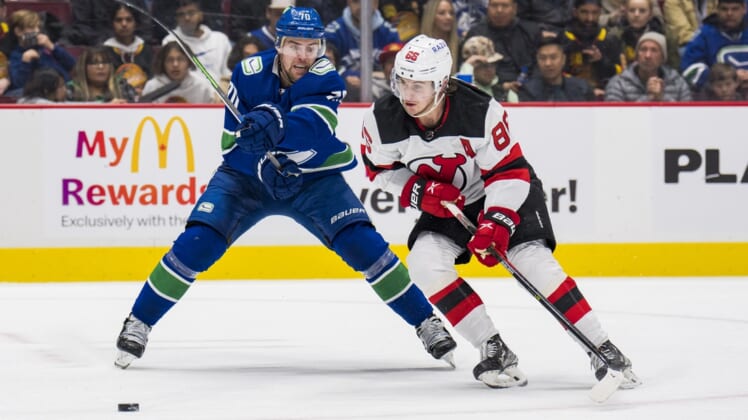 Bo Horvat scored two goals and added an assist as the Vancouver Canucks defeated New Jersey for the first time in more than seven years, doubling up the visiting Devils 6-3 on Tuesday night.

Ryan Graves, Jack Hughes and Nathan Bastian scored for the Devils. Goalie Nico Daws was pulled at 8:51 of the second period after allowing four goals on 21 shots; Jon Gillies stopped eight of 10 shots the rest of the way.

With the hosts leading 4-3, the Canucks’ Tyler Motte was assessed a double-minor penalty for high sticking New Jersey’s Andreas Johnsson with 2:02 left in the second.

The Canucks were able to hold onto the lead through the end of the period. Then Horvat scored on a short-handed breakaway at 1:24 of the third, rattling a wrist shot from between the hashmarks off the post and in, to make it 5-3.

Lammikko tallied at 12:10 of the third to help clinch the victory.

The Canucks opened the scoring at 3:34 of the first period as Hunt scored on a slap shot from the left faceoff dot on the rush.

The Canucks made it 2-0 at 10:59 as Horvat’s shot popped out of Daws’ glove and Hoglander batted the rebound out of midair and into the net.

The Devils pulled with a goal at 17:17 as Graves scored on a wrist shot from the left faceoff dot.

New Jersey tied the score at 4:25 of the second on a breakaway by Hughes.

The Canucks regained a two-goal lead by tallying twice in a 17-second span.

Horvat broke the tie at 8:34, knocking down a Devils pass at his own blue line and skating down the left wing before his slap shot from the top of the faceoff circle squeezed under Daws’ blocker and trickled over the goal line.

Pearson got to the front of the net and redirected Tyler Myers’ slap pass from the right point at 8:51 to end Daws’ night.