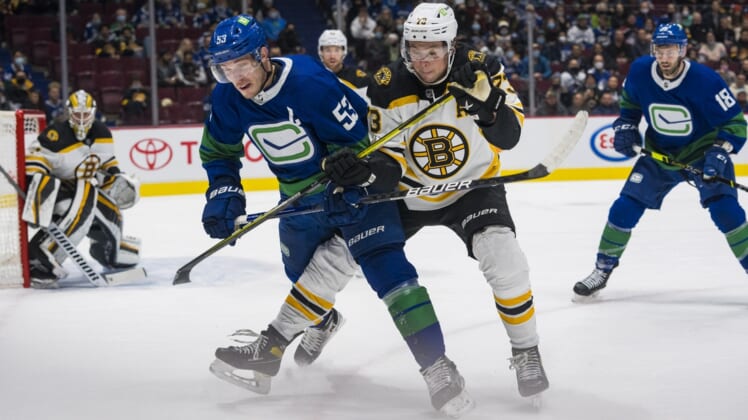 J.T. Miller and Bo Horvat both scored in the shootout to give the host Vancouver Canucks a 2-1 victory over the Boston Bruins on Wednesday.

It was the Canucks’ second consecutive win after Bruce Boudreau took over as head coach.

Brock Boeser scored in regulation time for the Canucks, who have won four of five games. Goaltender Thatcher Demko made 35 saves through overtime, as well as both Boston players he faced in the shootout, to celebrate his 26th birthday.

Patrice Bergeron replied for the Bruins to force extra time. Boston has the two Alberta teams ahead on their schedule during a three-game trip through Western Canada. Goalie Jeremy Swayman stopped 31 shots in a battle between the netminders. The Bruins have dropped two straight games, both in extra time, and are on a 3-2-2 run.

Miller, who is officially credited with the winner, scored in the second round of the shootout by patiently moving across the slot before he doubled back to convert the forehand deke. Horvat sealed the deal when he converted a wrist shot.

Demko stopped both David Pastrnak and Charlie Coyle in the shootout.

Boeser, who snapped a 13-game goal-scoring drought in the previous outing, broke the scoreless deadlock with 4:59 remaining in the second period. Boeser was in the high slot when Miller threaded a shot-pass through a defender’s legs, and redirected the puck into the top corner for the power-play marker and his sixth goal of the season.

Bergeron, playing only a couple of days after having surgery to fix a broken nose that requires him to wear a full mask, replied with a man-advantage marker of his own at 4:51 of the third period. While the visitors were enjoying a five-on-three advantage, Bergeron was parked at the doorstep and deflected Pastrnak’s point shot up and over Demko for his ninth goal of the season.

The Canucks won at a cost. Defenseman Travis Hamonic left the game late in the second period due to a lower-body injury after he was hit by Brad Marchand, who was penalized for interference. Vancouver was also without veteran defenseman Oliver Ekman-Larsson due to an undisclosed issue.