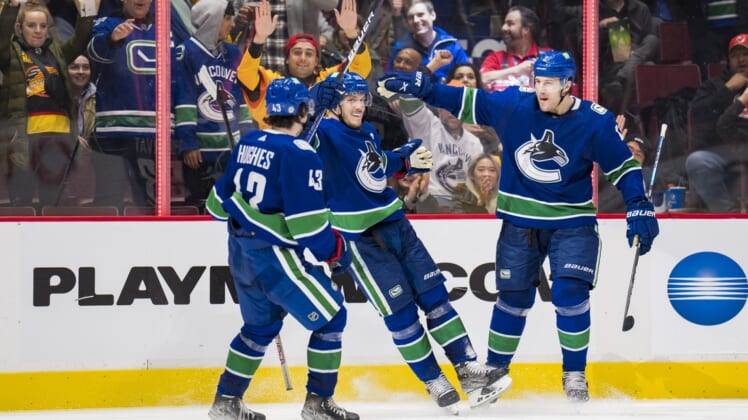 The Vancouver Canucks will continue their postseason push when they host the struggling Detroit Red Wings, losers of six straight, on Thursday night.

The Canucks are 4-1-1 in their past six games, with the lone regulation loss coming against the two-time defending Stanley Cup champion Tampa Bay Lightning on Sunday.

Defenseman Quinn Hughes got some family bragging rights when the Canucks defeated the visiting New Jersey Devils 6-3 on Tuesday, moving Vancouver within one point of the second wild-card playoff berth in the Western Conference and snapping a 12-game losing streak against New Jersey that dated to a 2-0 win on Nov. 25, 2014. Quinn Hughes had one assist and was plus-4 in his first victory against older brother Jack, who had a goal and an assist for the Devils.

“It was nice to beat him finally,” Quinn Hughes said. “But at the same time, at this point of the season, we needed a win so badly, it wasn’t really about that.”

Bo Horvat had two goals and an assist in the win. He was a rookie the last time Vancouver defeated New Jersey.

“He was a true leader,” Canucks coach Bruce Boudreau said Horvat’s play in the win. “They were taking it to us a little bit until he scored that short-handed goal to start the third period. On the bench, he was vocal. He was a true captain.”

Horvat has 14 points (eight goals, six assists) in his past 10 games.

“When things are going in and helping your team offensively, you feel good about yourself,” Horvat said. “I don’t feel like I’ve changed my game a whole lot from the beginning of the year, it’s just a matter of it going in and things happening.”

Tanner Pearson added a goal and an assist for the Canucks and J.T. Miller had three assists to extend his point streak to 13 games, during which he has 27 points (eight goals, 19 assists). Goaltender Thatcher Demko made 32 saves.

The Canucks led 4-3 late in the second period when forward Tyler Motte was assessed a double-minor penalty for high-sticking. Vancouver escaped the period with the lead, and Horvat scored on a short-handed breakaway 1:24 into the third to demoralize the Devils. Quinn Hughes’ pass sent Horvat in alone.

“Obviously your No. 1 goal is to kill it off and when you have the opportunity, when you see a chance to take off like that, (Quinn) Hughes made a great play to me and luckily I got it off quick enough to go in,” Horvat said.

The Red Wings are coming off a 7-5 road loss to the Edmonton Oilers, a game that saw them fall behind 4-1 in the first period, then tie the game at 4-4 and 5-5 in the third period before losing. The loss came despite two goals by defenseman Marc Staal, who had the first multiple-goal performance of his 1,001-game NHL career.

Detroit pulled starting goalie Thomas Greiss after Edmonton took a 3-0 lead 4:35 into the game. The three goals came before the Red Wings managed a shot on goal.