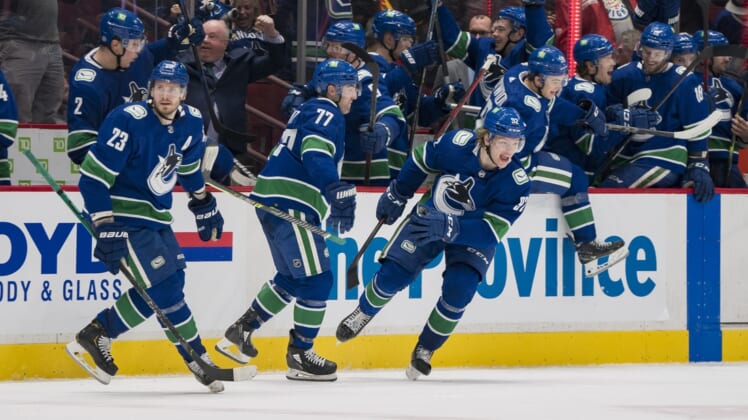 Six points out of both paths to the playoffs with just eight games remaining, the Vancouver Canucks are a longshot to make the Stanley Cup playoffs.

“There isn’t an athlete in the world who doesn’t want to be an underdog,” Boudreau said he told his team before the Canucks (36-28-10, 82 points) won their fourth straight game on Tuesday, a 5-4 overtime win over Vegas. “I tell the guys the best feeling in the world is doing something others don’t think you can.”

Not many think Vancouver can catch the third-place Los Angeles Kings in the Pacific Division or the Dallas Stars for the final Western Conference wild-card spot (and Vegas a point ahead of them, too), but the Canucks are still alive. And with games against both the Kings and Stars remaining, the Canucks cannot be counted out quite yet.

Even after they had squandered a 4-2 third-period lead Tuesday night against Vegas, Quinn Hughes sustained them with a backhand rebound of a Conor Garland shot 51 seconds into overtime. Shea Theodore had tied the score for Vegas with just 41.4 seconds left in regulation.

“It was a great lesson to be learned, quite frankly,” Boudreau said. “When you’re playing a good team you can’t sit back, and that lesson usually costs you, and it didn’t cost us tonight, so it was a very cheap lesson learned.”

Hughes hadn’t scored a point in four games before his game-winner, which came after Garland circled around the top of the zone and then rushed up the right side where he fired a wrist shot into the pads of Vegas goaltender Robin Lehner. When the rebound bounced in front of the crease, Hughes scooped up the loose puck and outwaited Lehner before flipping in a backhand shot into the right side of the goal.

“It happened so quickly,” Hughes said. “It’s a big goal and hopefully (there’s) more to come. There has been no quit in the group the whole year and the only thing I was nervous about is our overtimes haven’t been great recently. … We have eight games left and we’re excited because we want to be in it.”

“It’s pretty clear what we have to do. We’ve got to win,” forward Elias Pettersson, who had a goal and two assists in Tuesday’s win, said. “We feel pretty good now. We’ve won four in a row, but it doesn’t mean (much) if we don’t continue this way, playing good hockey. We’re still behind. We’ve still got to win games.”

Nick Schmaltz was one of the few bright spots for Arizona on Tuesday, finishing with a goal and an assist. The Coyotes are just 2-10-1 over their last 13 games and have allowed five or more goals in six of eight.

Centers Nathan Smith — who played for Minnesota State, which Saturday lost to Denver in the Frozen Four final — and Jack McBain, who starred at Boston College, both made their NHL debuts Tuesday.

“They worked hard, they competed,” Arizona coach Andre Tourigny said. “But I wanted a little bit more from our older guys, personally. Our young guys need role models, and I felt our team worked but needed more of a push.”