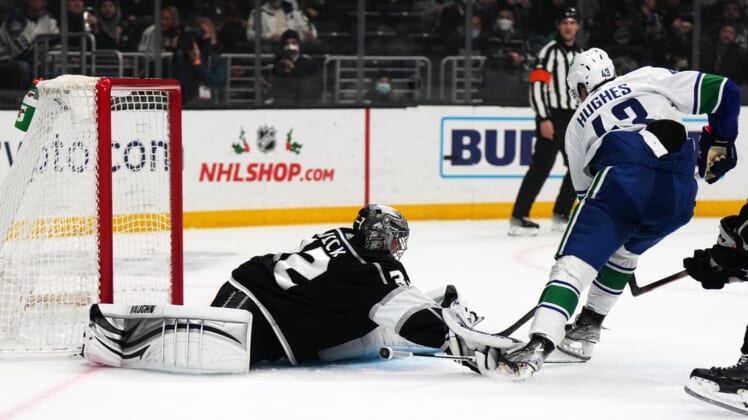 Jonathan Quick made 17 saves and stopped four of five attempts in the shootout to lift the Los Angeles Kings to a 2-1 win against the visiting Vancouver Canucks on Thursday night.

Quick was given the start two nights after allowing five goals on 15 shots and getting pulled in a 6-3 loss to the visiting Vegas Golden Knights.

Brendan Lemieux scored in regulation and Viktor Arvidsson and Adrian Kempe scored in the shootout for the Kings.

Bo Horvat scored the tying goal in the third period and Jaroslav Halak made 34 saves for the Canucks, who were coming off a 2-1 overtime win at the Anaheim Ducks on Wednesday night, their seventh straight win.

Vancouver coach Bruce Boudreau was trying to become the first NHL coach to win his first eight games with a new team.

On Thursday, the Canucks went on a power play when Arvidsson flipped the puck over the glass for a delay-of-game penalty at 11:09 of the third period. Less than a minute later, J.T. Miller fed Horvat for a redirection that tied the score 1-1 at 12:06. Miller extended his point streak to eight games (three goals, nine assists).

After a scoreless first period, the Kings turned up the pressure to start the second.

Carl Grundstrom hit the post from the slot at 2:07, and Halak robbed Kempe on back-to-back shots at 4:05. The Kings’ efforts ultimately paid off, however, as they broke through at 7:39.

Blake Lizotte forced a turnover in the Vancouver end and the puck went to Christian Wolanin at the left point. He took a slap shot and Lemieux deflected the puck past Halak for his sixth goal of the season.

The Canucks went nearly 10 minutes without a shot on goal and were outshot 16-3 in the second period.

For the second straight night, Vancouver was blanked in the first two periods and trailed 1-0 entering the third.

Lemieux was awarded a penalty shot 57 seconds into the third period, but Halak made the save to keep the deficit at one goal.