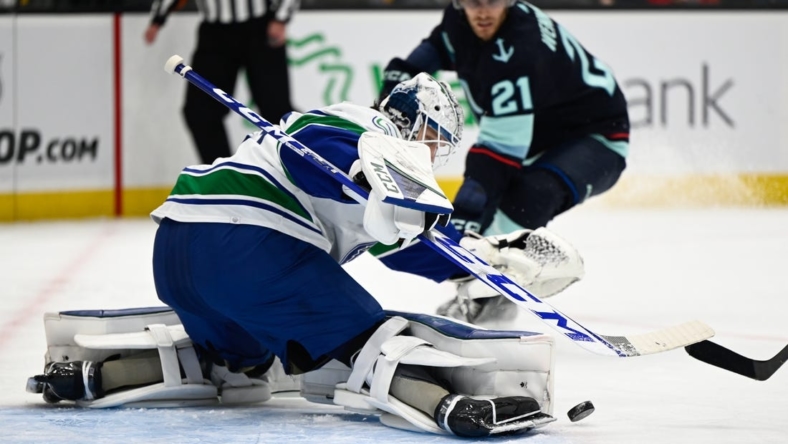 Elias Pettersson scored the tiebreaking goal 1:16 into the third period and the Vancouver Canucks held on for their first victory of the season, defeating the host Seattle Kraken 5-4 on Thursday night.

Ilya Mikheyev scored twice and Andrei Kuzmenko, Conor Garland and Pettersson each had a goal and an assist for the Canucks, who entered the game 0-5-2. Luke Schenn had two assists.

Jamie Oleksiak, Jared McCann, Matty Beniers and Jaden Schwartz scored for Seattle, which dropped to 1-3-1 at home. Goalie Martin Jones, filling in for the injured Philipp Grubauer, stopped 14 of 18 shots.

Pettersson broke a 3-3 tie after Schenn skated over the Seattle blue line and floated the puck toward the net. Seattle defenseman Carson Soucy knocked the puck down but it bounced off the ice and Pettersson tipped it out of midair and just inside the left post from the low slot.

Garland added an empty-netter with 1:25 remaining, which proved pivotal when Schwartz netted a power-play goal with 30 seconds to go to draw Seattle within one.

The Canucks opened the scoring 4:38 into the first. Schenn sent a soft shot toward the net from the right-wing boards and Jones steered the puck away with his blocker but it hit the body of Kraken defenseman Justin Schultz and dropped to the ice just outside the crease, where Mikheyev knocked It into the net.

The Kraken tied it at 18:39 of the period on Oleksiak’s shot from the right point through a screen.

Seattle took the lead on McCann’s breakaway with just 15.6 seconds left in the period, his fourth straight game with a goal.

The Canucks regained the lead with a pair of power-play goals in the second.

Mikheyev scored on a wrist shot from the right faceoff circle at 3:58 of the period to tie it at 2-2. Kuzmenko made it 3-2 at 14:17, tipping J.T. Miller’s pass just inside the right post.

The Kraken evened the score just 15 seconds later on a Beniers breakaway.