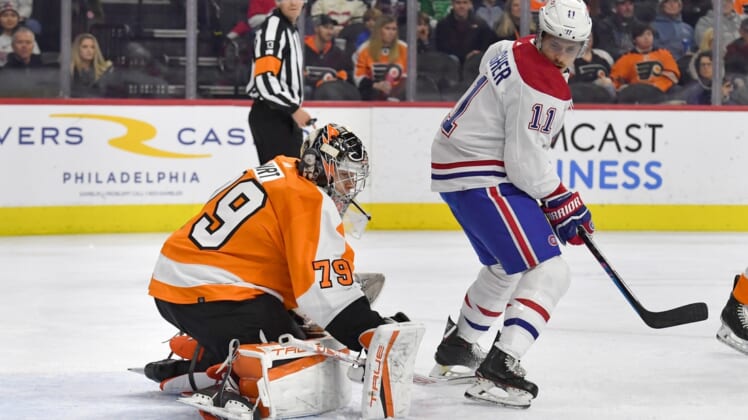 Rem Pitlick tallied late in regulation and Cole Caufield scored at 2:10 of overtime to lift the Montreal Canadiens past the host Philadelphia Flyers 4-3 on Sunday.

Caufield, who added an assist, picked up his eighth goal in the last 14 games.

Nick Suzuki scored two goals, Pitlick finished with a goal and an assist, and the Canadiens snapped a two-game losing streak. Chris Wideman had two assists, while Montreal goaltender Sam Montembeault made 27 saves.

Kevin Hayes, Claude Giroux and Cam Atkinson each scored for the Flyers, who have dropped three in a row. Philadelphia goaltender Carter Hart stopped 31 shots.

The Flyers went ahead 1-0 when Hayes received a crisp pass through the crease from Travis Sanheim and scored at 7:00 of the first period.

After the Canadiens earned an early power play in the second, Suzuki scored through traffic in front to equalize at 1.

The Flyers regained a 2-1 advantage at 7:11 when Giroux corralled a loose puck in front and scored for his 900th career point.

Philadelphia has had trouble holding leads all season and Montreal tied the game 1:07 later when Suzuki notched his second goal of the game.

The Flyers took a 3-2 advantage at 2:41 of the third when Joel Farabee skated around Wideman and found Atkinson, who notched his 22nd goal of the season.

Travis Konecny nearly extended to a two-goal lead at 3:15 of the final period, but Montembeault made a nifty save.

Montreal had a stellar scoring chance at 9:29 when Brendan Gallagher fired a slap shot from the point. But Hart made a pad save and was able to clear the puck.

Montembeault was pulled for an extra skater at 18:40 and Wideman was assessed a penalty for an illegal check against Farabee 20 seconds later.

However, the Canadiens still tied the game with 42.1 seconds left when Pitlick scored short-handed with Montembeault pulled for the second time.

Caufield came off the bench, skated in and ripped a slap shot past Hart for the game-winner in overtime.