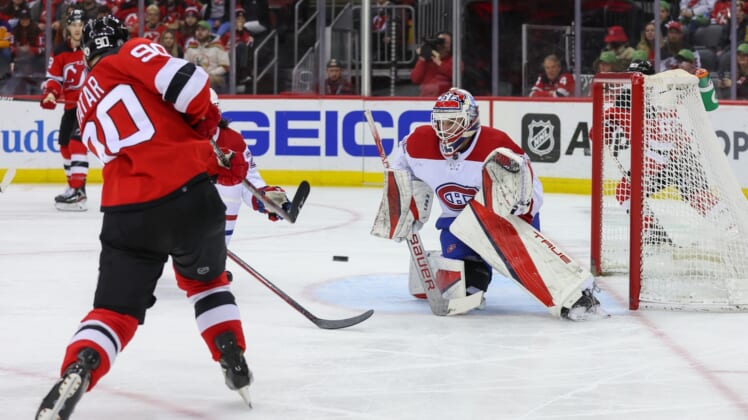 There’s a glimmer of hope in Montreal.

The Canadiens, who are in last place in the Atlantic Division and are out of playoff contention, have gone 10-4-4 since Feb. 17. That success includes a hard-fought 4-3 home loss to the Florida Panthers on Thursday.

On Tuesday night, the Canadiens will try to continue their improvement, this time visiting the Panthers, who lead the Atlantic and appear to be strong contenders to win what would be the first Stanley Cup in franchise history.

This past weekend, Montreal defeated rival Toronto 4-2 on Saturday and then got a point in a 3-2 shootout loss to the New Jersey Devils on Sunday.

Against the Devils, Montreal nearly won in overtime when former Panthers winger Mike Hoffman hit both posts with an oh-so-close shot.

Martin St. Louis, who was named Montreal’s interim coach on Feb. 9 following the firing of Dominique Ducharme, has been generally pleased with the Canadiens’ effort, even in the loss on Sunday.

“It was our third game in four nights, and we tied it up late,” St. Louis said. “I’m happy with the way we fought.”

Former Panthers goalie Sam Montembeault got the start Sunday, making 30 saves. But the Canadiens could go back to Jake Allen on Tuesday.

Meanwhile, the Panthers — who lost 5-2 at Toronto on Sunday — will return home after playing nine of their past 10 games on the road. They are 7-2-1 in those 10 games.

Florida now will play four of its next six games at home. That should be good news for the Panthers, who lead the NHL with 148 home goals. The Panthers also are tied with Colorado for the NHL lead in home wins (26).

“It’s going to be nice to get home and play in front of our fans,” Panthers defenseman MacKenzie Weegar said.

The Panthers are led by winger Jonathan Huberdeau, who on Saturday set the franchise record for most games played with 655. He also ranks first in the NHL with 69 assists, and he’s atop the Panthers’ scoring list with 90 points.

Despite missing 13 games earlier this season, Panthers captain Aleksander Barkov leads the team with 28 goals. He is one of six Panthers with more than 20 goals this season, a list that also includes Anthony Duclair (26), Sam Bennett (25), Sam Reinhart (24), Carter Verhaeghe (21) and Huberdeau (21).

The Panthers likely will start Sergei Bobrovsky in goal on Tuesday, but they also have rookie Spencer Knight.

Bobrovsky is 31-6-3 with a 2.57 GAA and a .916 save percentage and has won five straight starts. However, he was hit in the face by a puck while sitting on the bench on March 14 and missed more than two weeks before returning to action on Saturday.

After facing the Canadiens, the Panthers will host the Chicago Blackhawks on Thursday.