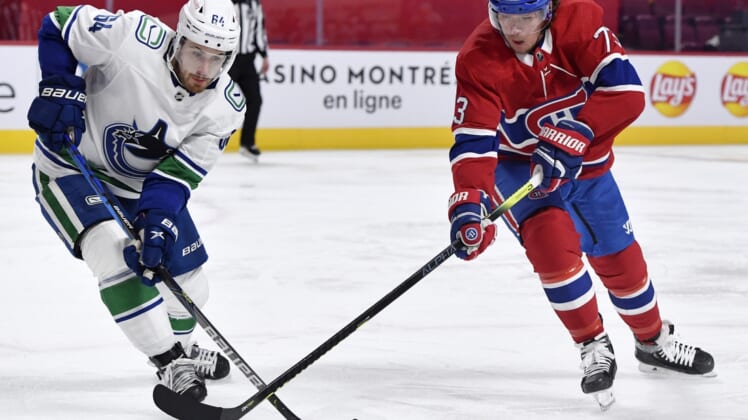 A big reason the Montreal Canadiens are among the highest-scoring teams in the NHL is due to their play against the Vancouver Canucks.

Coming off another lopsided win over the Canucks, the host Canadiens look for a fourth straight victory in the season series on Tuesday night.

Defenseman Jeff Petry had two goals and an assist while Tyler Toffoli continued his success against his former team with a goal as Montreal bounced back from its first regulation defeat of the season, 2-0 to the Calgary Flames on Saturday.

“We have to be ready to face a team that will be better than (Monday).”

Toffoli, who played 10 games with Vancouver last season after being traded from the Los Angeles Kings, has recorded six of his team-leading seven goals and two of his three assists against his former team this season.

Montreal’s Carey Price (4-0-2, 2.77 goals-against average) made 27 saves on Monday to record his third straight victory. However, Jake Allen (2-1-0, 1.69 GAA) could be in net for the finale of the back-to-back set. Allen received plenty of offensive support while making just 14 saves during a 7-3 win at Vancouver on Jan. 21.

The Canucks, whose 41 goals lead the NHL, had their season-high, four-game winning streak end Monday. Perhaps most concerning was Vancouver’s defensive effort after the team allowed one goal in each of the previous four contests.

Then again, facing the high-potent Canadiens might have something to do with things.

“It’s a little less about us figuring out our game and more about us playing the Canadiens,” Canucks netminder Braden Holtby, who made 34 saves on Monday, told Sportsnet650. “In order for us to get where we want to go, we have to believe we’re the better team.”

After Holtby was roughed up Monday, Thatcher Demko (3-3-0, 3.21 GAA) is likely to start in goal for the Canucks while searching for a fourth consecutive winning start. Demko stopped 100 of 103 shots in winning three straight starts since allowing all seven goals on 42 shots during that loss to Montreal on Jan. 21.

Vancouver’s Brock Boeser (eight goals, three assists) was held without a point Monday after recording five in his previous two games combined. He has just one point in the last three versus Montreal.

Canadiens defenseman Shea Weber, who has two assists in the four games versus Vancouver this season, is slated to play his 1,000th career game Tuesday.