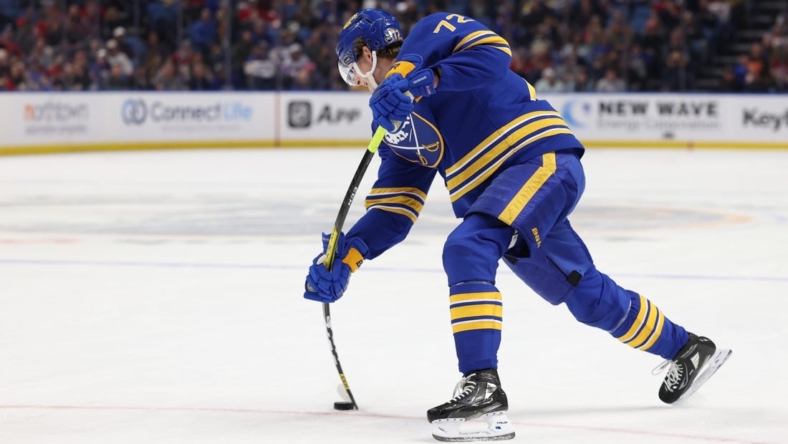 Brendan Gallagher’s tiebreaking second goal late in the third period led the visiting Montreal Canadiens to a 3-2 win over the Buffalo Sabres on Thursday night.

With the game knotted at 2, Josh Anderson ripped a long shot into traffic in front of Buffalo’s net with 3:46 remaining in regulation. Through the mass of players, Gallagher was credited with his third goal after it hit the right wing’s stick.

Outstanding all night, goalie Sam Montembeault made a final stop of Rasmus Dahlin’s one-timer from in close as time expired. Montreal won for the third time in its past five games (3-2-0).

In addition to Gallagher’s pair of markers, Kaiden Guhle found the net for the first time in his NHL career. David Savard handed out two assists, while Montembeault was stellar in the crease – stopping 43 shots – to move to 2-1-0.

In the first game of their four-game road trip, the Canadiens were awarded a pair of power plays in the opening 3:13. But Montreal generated just three shots against Comrie as the Sabres’ penalty-kill units did their jobs.

Montreal scored after Christian Dvorak beat out a potential icing infraction, kept the play alive in the offensive zone and the puck found its way to Gallagher.

He fired a shot that Comrie initially saved with his right pad, but the puck ricocheted off defenseman Owen Power’s left skate and in for Gallagher’s marker, his second of the season, at 13:31.

Thirty-one seconds into the next period, Skinner scored as Kirby Dach’s hooking penalty carried over. Skinner settled down a bouncing puck, deked his way around Montembeault and roofed the tying goal.

Buffalo continued to push the pace of play in the second period – outshooting the Canadiens 13-9 behind two more power-play chances – but neither Atlantic Division team could break the 1-1 tie through 40 minutes of play.

At 6:51 of the third, Guhle – the 16th overall pick in the 2020 draft – one-timed a blast from the right circle off a feed from Savard for his first NHL goal. But Cozens evened it again at 12:54 by scoring his third goal of the season.