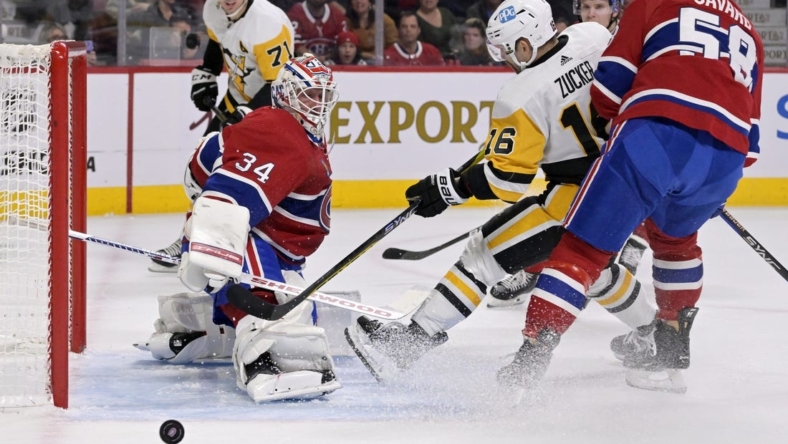 Mike Hoffman scored 1:03 into overtime and the Montreal Canadiens beat the visiting Pittsburgh Penguins 5-4 for their season-high third straight win.

Off a rush with Kirby Dach, Hoffman beat Pittsburgh’s Tristan Jarry (37 saves) in the early stages of the extra session to cap a wild game that featured five goals in the third period. Hoffman has four goals in three games.

Nick Suzuki finished with a goal and an assist, and Dach and Kaiden Guhle had two assists each.

Jeff Petry and Rickard Rakell each had a goal and an assist, and Jason Zucker posted three assists for Pittsburgh, which was also trying for a season-high third consecutive win. The Penguins have lost eight of the last 10.

The Canadiens tied the contest at 2-2 just 49 seconds into the final frame, when Cole Caufield drove the puck past Jarry, who was screened by Dach. Pittsburgh, though, went ahead 3:19 into the third when Evgeni Malkin’s snap shot was too quick for Montreal’s Jake Allen (20 saves) to stop. But less than a minute later, Suzuki was quick to the puck, and pushed it past Jarry to level the game again.

Brock McGinn countered with his third goal in three games off a two-on-one with 5:58 remaining in regulation to give Pittsburgh a 4-3 edge. Montreal, though, tied it when Sean Monahan put home a rebound 40 seconds later.

Back from a two-game suspension for boarding during last weekend’s loss at Vegas, Josh Anderson sent a wide-open drive, from the high slot, past Jarry on Montreal’s first shot of the night, just 1:48 into the contest. It was one of only 11 combined shots between the two teams through the first 20 minutes.

The Penguins tied things when they caught a break just 1:46 into the second period. From behind the net, Petry threw the puck in front of the goal, where it found the stick of Montreal’s Jake Evans, and deflected in the net.

Less than two minutes last later, Rakell put the Penguins ahead when he rather blindly deflected in Marcus Pettersson’s shot from just inside the blue line.