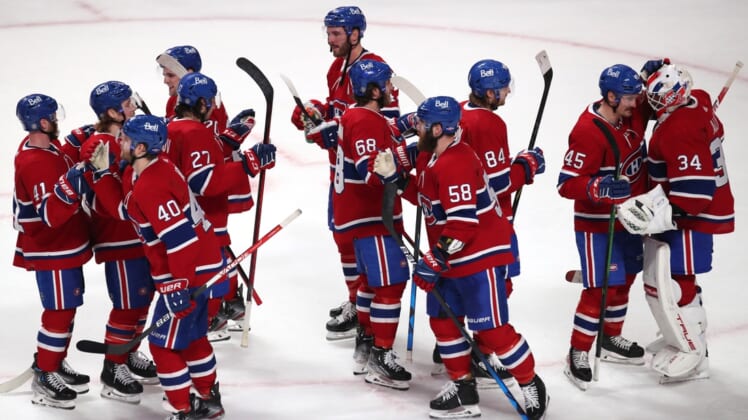 Fresh off an emotional win, the Montreal Canadiens begin a four-game road trip against the New Jersey Devils on Sunday night in Newark, N.J.

Montreal is last in the Atlantic Division with 46 points, five fewer than the cellar-dwelling Devils in the Metropolitan Division. The Canadiens then play Eastern Conference points leader Florida on Tuesday, Metropolitan leader Carolina two nights later before finishing up with two-time defending Stanley Cup champion Tampa Bay on Saturday.

Montreal officially was eliminated from playoff contention on Friday after Washington defeated the Buffalo Sabres in a shootout. But the Canadiens still hit the road on a high after posting a 4-2 win over the rival Toronto Maple Leafs on Saturday night in a game that had a playoff atmosphere at the Bell Centre.

Paul Byron scored with 2:28 remaining in the third period on Saturday and Jake Allen made 49 saves, the most by a Canadiens goalie in a regular-season game against Toronto since 1955-56, when shots on goal officially began being tracked.

“I keep it very short,” Allen said of enjoying the victory. “We fly out quickly tonight and then you move right on. We still have (17) games left. This week coming up is probably the toughest we’re going to have all year. Playoff hockey with three of the best teams in the league coming up. So you’ve got to switch quick. Enjoy for a few minutes and then on to tomorrow.”

Still, both Allen and Byron admitted the win — just the team’s league-low 18th of the season — was a highlight during an otherwise disappointing season.

“I think these games are special … it connects close to home,” Allen said. “It’s something I always grew up watching — Montreal-Toronto on Hockey Night In Canada. It’s special to be in there, be able to play between the pipes and get the win. And on top of that against the Leafs. I know it’s another game but it’s a pretty special feeling. No question.”

“The crowd was incredible,” added Byron. “The atmosphere was great. Even though we’re eliminated from the playoffs it kind of had the intensity of a playoff game tonight.”

New Jersey comes in off a 4-3 loss to the Washington Capitals on Saturday.

Jack Hughes collected a goal and an assist and defenseman Damon Severson gave the Devils a 2-1 lead in the second period with his 10th goal of the season. Washington answered with three straight goals to start the third before Jesper Bratt trimmed the Capitals lead to 4-3 with a goal with 32 seconds to go. The Devils failed to garner a shot on goal the rest of the way and lost for the fifth time in the last six games.

“We battled to the end,” New Jersey coach Lindy Ruff said. “We made a couple of mistakes. I thought they made a couple of big mistakes in the second period and we didn’t capitalize. … Problem is, when we made a mistake it went into the back of the net.”