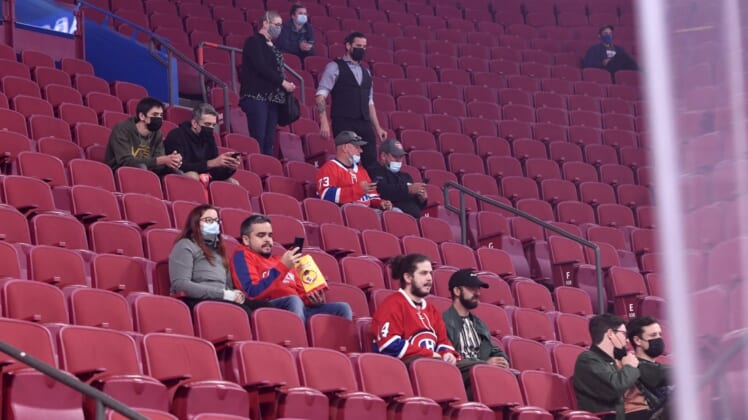 Sep 27, 2021; Montreal, Quebec, CAN; Some of the 7500 fans allowed in look on during the warmup period before a game between the Toronto Maple Leafs and the Montreal Canadiens at the Bell Centre. Mandatory Credit: Eric Bolte-USA TODAY Sports

The Montreal Canadiens and CF Montreal will be allowed to expand to 100 percent capacity following Quebec’s latest health directives related to the COVID-19 pandemic.

The province’s health minister announced Thursday that capacity restrictions on “venues with assigned seating,” which includes the Canadiens’ Bell Centre and CF Montreal’s Stade Saputo, were being lifted Oct. 8.

All fans must be fully vaccinated and wear masks indoors.

Last week, the NHL said it expected 30 of 32 home teams to be able to operate at full capacity, with only the Canadiens and Vancouver Canucks not yet allowed. That leaves Vancouver as the league’s lone team still awaiting the green light from local health officials.

The ruling comes in time for the start of the NHL regular season. The Habs play their home opener Oct. 16 against the New York Rangers.

That same day, CF Montreal will enjoy full capacity for the first time since Major League Soccer returned to action amid the pandemic. The club, once known as the Impact, will welcome the Philadelphia Union.

“CF Montreal is pleased with the latest directives announced by Quebec’s health authorities on Thursday afternoon, which will allow the Club to play its remaining games at Stade Saputo at full capacity, starting October 8,” the club said in a press release.