Can the Raiders Strike a Deal in Oakland for 2019? 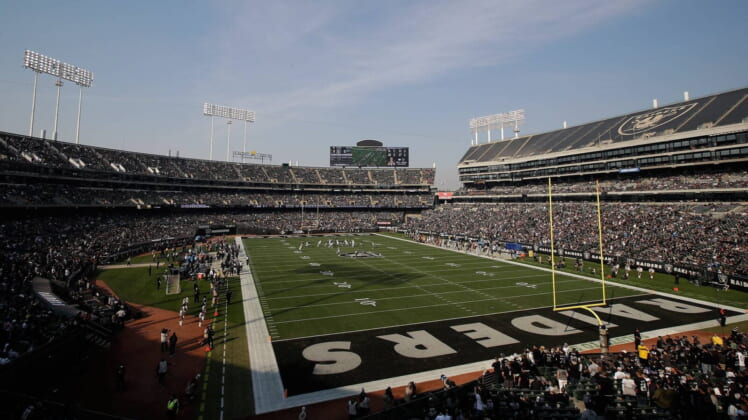 Scott McKibben of the Oakland Coliseum Authority joined Silver and Black Today on CBS Sports Radio 1140-AM yesterday to discuss the lease option on the table for the Raiders. But will owner Mark Davis put aside the animosity thrown at him by the City of Oakland and sign it?

Appearing on Silver and Black Today on CBS Sports Radio 1140-AM yesterday, Scott McKibben of the Oakland Coliseum Authority discussed how the body never pulled its  $7.5 million lease extension to the Raiders off the table for 2019. McKibben, who had confirmed this to the Las Vegas Review-Journal earlier in the week, said while the Authority is ready to talk with the Raiders, he’s only exchanged emails with Raiders team president Marc Badain.

“No, it’s not really it’s not progressing. It’s really not going anywhere either forward or backward,” McKibben told the show. “I, once again, made it clear to him that, you know, we wanted the Raiders to stay and to play the last season, or maybe two, here and that the offer was still on the table.”

We’d like to find a way to perhaps set all this emotion aside on both sides of the issue, let the litigation rest all by itself and move on and just do a lease extension and go forward. – Scott McKibben, Oakland Coliseum Authority

Unconfirmed reports out of the Bay Area over the weekend said the Raiders and the Authority were, in fact, discussing the lease option but neither side has confirmed those reports.

What's the latest on the #Raiders and the Oakland Coliseum? Authority Board member Scott McKibben joined us on @SportsRadio1140 this morning. Hear the full interview here: https://t.co/ESNEFop0X2 pic.twitter.com/mDOZqgwd77

From McKibben’s point of view, he understands why Raiders owner Mark Davis might be reluctant to talk to him due to the City of Oakland’s antitrust lawsuit against his team and the National Football League. Yet McKibben points out the Authority itself isn’t involved in the lawsuit and wants only to host the Raiders final season in Oakland.

That distinction – that the Authority is not suing the Raiders – is something McKibben says is key for fans and the general public to understand. Still, if he and the Raiders were to reach an agreement on the lease, the City of Oakland must still approve it. There’s no guarantee that would happen.

Still, McKibben feels the fans and the thousands of part-time employees at the facility deserve at least one more season. The economic impact of an early departure would not be good for the community.

“We’re trying our best to make sure that the fans at the public realize that those of us who have this transactional contractual relationship with the Raiders are are not involved in this loss,” McKibben Said. “We have about, on game day with varying tasks, anything from security to ticket takers to ushers, to concession workers – we employ around 3000 people on game day. So without question, to us, it’s of importance related to the preservation of these jobs and for the local economy.”

While McKibben didn’t sound sure the team and the Authority could come to an agreement, he hopes emotions can be put aside so a deal can be finalized.

“We’d like to find a way to perhaps set all this emotion aside on both sides of the issue, let the litigation rest all by itself and move on and just do a lease extension and go forward,” McKibben said.

Whether or not the Raiders and their management feel the same way, or are willing to do so, remains the question.