Can No. 21 Texas A&M Aggies sustain success against Missouri after shocking Alabama? 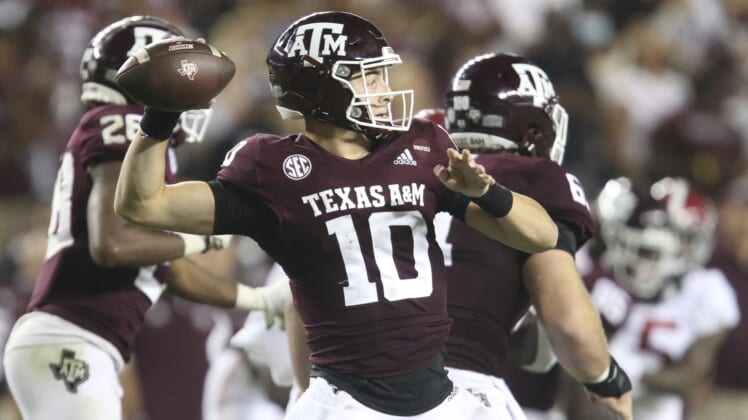 Texas A&M is fresh off the biggest upset of the college football season and coach Jimbo Fisher doesn’t want his Aggies resting on their laurels.

The No. 21 Aggies savored their slaying of then-No. 1 Alabama but must quickly turn their focus to Missouri in Saturday’s SEC matchup in Columbia, Mo.

Texas A&M (4-2, 1-2 SEC) was sputtering and had fallen out of the rankings before recording the 41-38 home win over Alabama last Saturday.

“We’re not going to walk around with our chest out because we beat Alabama,” Fisher said. “We’re going to understand why we did it so we can do it against everyone else on our schedule.”

The play of quarterback Zach Calzada was a huge factor in the difference in results. He passed for just 151 yards against Arkansas and 135 against Mississippi State before rebounding with a career-high 285 against Alabama. He also matched his career best of three passing touchdowns.

“Zach Calzada played better,” Fisher said. “He started hot. He did an excellent job of keeping his eyes up. He played with great toughness. He got banged and bruised but continued to get up off the mat.”

Calzada and the Aggies will look to keep the offense cranked up against Missouri (3-3, 0-2), which is allowing an SEC-worst 37.5 points and 497.7 yards per game.

The Texas A&M offense averages 26.3 points and 376.7 yards per game. Calzada has completed 56.6 percent of his passes for 1,029 yards, eight touchdowns and five interceptions.

Isaiah Spiller has rushed for 491 yards and three touchdowns for the Aggies, while Ainias Smith leads the team with 26 catches for 285 yards and four scores.

Running back Tyler Badie rushed for a career-best 217 yards for his second 200-yard outing of the season. He had 203 in a season-opening win over Central Michigan.

He also scored three touchdowns (two rushing, one receiving) for his fourth multi-TD game of the season. Badie ranks second nationally with 12 touchdowns (eight rushing, four receiving), rushing for 667 yards and covering 212 yards on his 25 receptions this season.

“He’s probably the least-talked-about great player in the country right now,” Missouri coach Eliah Drinkwitz said. “I mean, the guy is playing at an extremely high level. Two-hundred yards rushing, three touchdowns. I mean, he refused to be tackled.

Tigers quarterback Connor Bazelak passed for two touchdowns against North Texas. He has completed 67 percent of his passes for 1,682 yards, 12 touchdowns and five interceptions for an offense averaging 37.8 points and 467 yards a game.

Missouri has, however, allowed 35 or more points four times this season, including a season-worst output during a 62-24 loss to Tennessee on Oct. 2.

“It wasn’t perfect, but we didn’t think we were going to transform into the ‘85 Bears overnight,” Drinkwitz said, referencing one of the top NFL defensive teams of all-time. “We’re working towards it. We took a big step. It’s a process.”

The teams are meeting for the first time since 2014. The Aggies hold an 8-7 series edge.