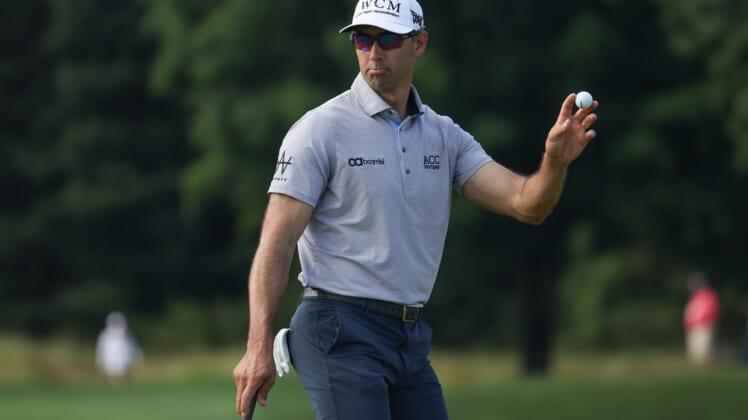 American Cameron Tringale rattled off six consecutive birdies and opened the Genesis Scottish Open with a 61 to lead after the first round Thursday at the Renaissance Club in North Berwick.

Tringale carded a birdie streak that began on the 10th hole and ran through No. 15 for his career-best round, a 9-under stroll in Scotland that was good for a three-shot advantage over Gary Woodland (64) and four ahead of South Africa’s Justin Harding. Harding petitioned along with Ian Poulter for court permission to play this week, winning the chance to do so after DP World Tour sanctions were paused.

“I got lucky this morning with the wind not being up, the other guys in my group were off to hot starts, making some putts and I decided to join the fun on number five,” Tringale said. “Then my putter got red-hot, and that’s how you do it. You do the best you can, I think I was just fortunate with the amount of putts I holed and I got plenty of practice shots around the green, I didn’t have to use them all that much because I struck it pretty nicely.”

Tringale, 34, has only one pro victory, which was the 2014 Franklin Templeton shootout, a team event. Thursday’s round was the 1,058th of Tringale’s professional career.

Scotland’s Ewen Ferguson is one of eight players tied for seventh at 3-under.

At 3-under after nine holes, Tringale said his confidence took off as his putter heated up.

“The good outcomes will come as a byproduct if I can keep my head on straight,” Tringale said, looking ahead to Friday.

Harding finished with a 5-under 65, well ahead of Poulter, who was well off the pace with a 78.

He was in good company in fighting conditions and the course on Thursday after wind speeds surged in the afternoon.

The field includes 14 of the top 15 players in the World Golf Rankings — Rory McIlroy, World No. 3, is not present — but top-ranked Scottie Scheffler (3-over 73) failed to keep pace in the morning wave when wind conditions were kind.

American Jordan Spieth had his own birdie streak — five holes — led briefly and was 5-under through eight on Thursday. He finished in a tie for 15th entering the second round with Spain’s Jon Rahm, who matched Spieth with a 68 in the opening round. The event is important as the proxy tuneup for the 150th Open Championship next week.

“It was a tale of two nines,” said Spieth.