Cameron Smith among 6 co-leaders at Memorial 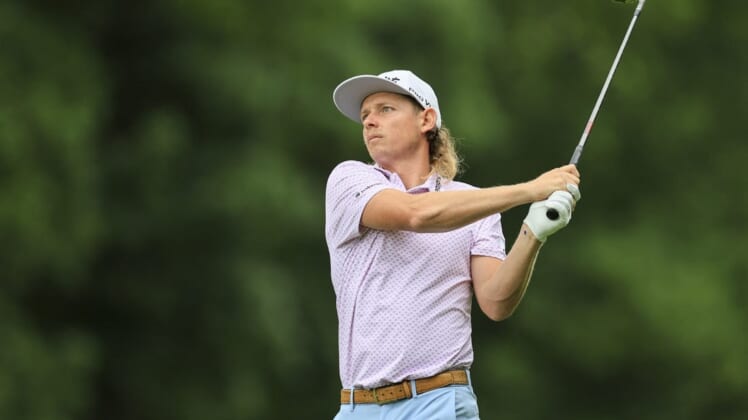 World No. 3 Cameron Smith of Australia was one of six players to shoot an opening-round, 5-under-par 67 Thursday to take a share of the lead at the Memorial Tournament in Dublin, Ohio.

The six co-leaders are one stroke ahead of Will Zalatoris, Denny McCarthy, Sahith Theegala and Wyndham Clark, who each opened with rounds of 4-under 68.

Smith made seven birdies and two bogeys Thursday. The winner of March’s Players Championship called the round “a little bit of a grind.”

“Had to make a few good pars on that last nine for me, the front nine,” Smith said. “It was just good to kind of hang in there, make a few birdies, see a few putts going in. I think this is about as easy as this place is going to get today.

“I think it’s going to be a lot of stressful golf and a lot of grinding over the weekend. Nice to kind of take the box there early in the week.”

Riley joined the tie late in the day. The PGA Tour rookie briefly held the sole lead last Sunday at the Charles Schwab Challenge before finishing tied for fourth.

After playing the front nine in even par, Riley rang up three straight birdies at Nos. 11-13 and eagled the par-5 15th with a 17-foot putt.

“Hit a drive down the right side and thankfully caught the fairway,” Riley said. “Thought it might have had a chance to go on the bunker. And when it was in off the right, had 262 (to the) hole, hit it perfect, a little cut 3-wood landed on the green and caught the slope and funneled down to about 15 feet and made the putt center cup. That was a nice one to grab.”

Lee is looking for a Texas double after winning the AT&T Byron Nelson in Dallas two weeks ago for the second straight year. He holed out for an eagle 2 with a 152-yard shot at the ninth hole to make the turn in 31.

Hughes, who has not had a great season, made nine birdies to counteract two bogeys and one double.

“I hit a few loose ones that I’d like to have back, but I did so many good things that it’s kind of easier to forget about those,” Hughes said.

Ten players were tied for 11th at 3-under 69, including Keegan Bradley, Max Homa, Ireland’s Shane Lowry, Mexico’s Abraham Ancer and Venezuela’s Jhonattan Vegas. Rory McIlroy of Northern Ireland shot a 2-under 70 and Spain’s Jon Rahm was at even par after a 72.

Bryson DeChambeau played his first round on the PGA Tour since the Masters after recovering from wrist surgery in April. He shot a 4-over 76 with four bogeys and one double bogey.

In similar fashion, Harris English made his first start on tour since January following hip surgery and shot a 5-over 77.

Hideki Matsuyama of Japan was disqualified nine holes into the event after a tour rules official ruled he used a non-conforming club, which had markings pained in white on the face.