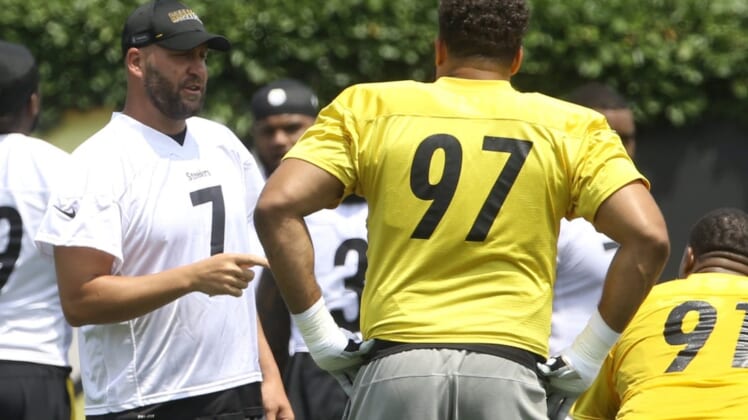 Pittsburgh Steelers captain Cameron Heyward didn’t take too kindly to former teammate Ben Roethlisberger’s recent claim that too many current NFL players are “coddled” and have a “me-type attitude.”

Roethlisberger’s comments were published Friday by the Pittsburgh Post-Gazette.

“The team was so important,” Roethlisberger said, referring to his first few seasons with the Steelers. “It was all about the team. Now, it’s about me and this, that and the other.

“I might be standing on a soapbox a little bit, but that’s my biggest takeaway from when I started to the end. It turned from a team-first to a me-type attitude. It was hard. It’s hard for these young guys, too. Social media. They’re treated so well in college. Now, this new NIL stuff, which is unbelievable. They’re treated so special. They’re coddled at a young age because college coaches need them to win, too. I know (former Miami of Ohio coach Terry) Hoeppner never coddled me. Neither did (former Steelers coach Bill) Cowher.”

Heyward, 33, was teammates with Roethlisberger from 2011 until the latter retired at the end of last season. The five-time Pro Bowl defensive lineman admitted to being upset upon hearing the words of the former quarterback.

“It looks as though we are looked at as selfish players, and I don’t think that’s the point,” he said on the “Not Just Football with Cam Heyward” podcast. “We have a lot of young players that come from different backgrounds, have experienced different things from what others or I may have experienced. That doesn’t make them selfish or more of a me-type attitude. … There are a lot more team-first guys than me-type attitude. I took offense to that.”

Heyward made it clear that he wasn’t throwing shade at Roethlisberger.

“Don’t say Cam is calling out Ben — it’s not like that,” Heyward said. “But I will say, I’ll protect my team. I will make sure that everybody knows that we care only about football on the field and less about off the field. We can all understand Ben has been a heck of a QB. You don’t do this game and become a Hall of Fame quarterback and do it at a low level.

“Ben has taken some hits not a lot of other teams could do. He saved us, he won games we weren’t supposed to win, and he’s always stepped up. But it was the team around him that helped him do it, and I don’t want anyone to ever forget that the whole team won — not just Ben.”

The six-time Pro Bowl selection played his entire 18-year career in Pittsburgh, and he owns most of the franchise’s passing records, including completions (5,440), yards (64,088) and touchdowns (418). He led the Steelers to two Super Bowl victories.