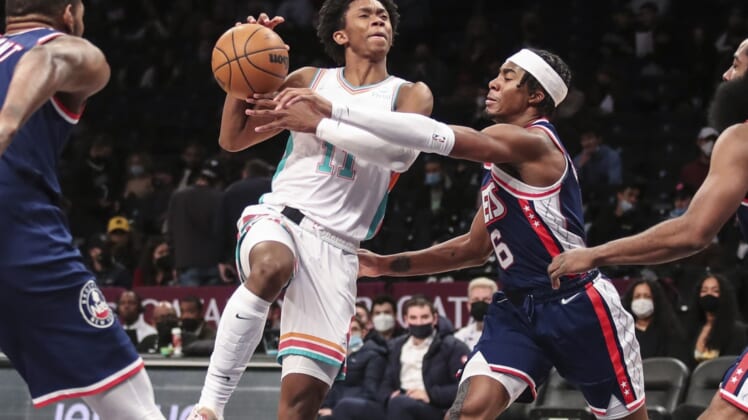 The Nets won their first home game since beating the Philadelphia 76ers on Dec. 16 and survived blowing a 12-point lead in the final five minutes of regulation.

Brooklyn won it when Kevin Durant moved into the lane and passed to Thomas, who was in front of the 3-point line. Thomas moved around a screen by Nic Claxton and got midway through the lane before releasing a 9-footer with his right hand over rookie Josh Primo.

After San Antonio called a timeout with 1.4 seconds left, the Spurs were unable to get a shot off before the buzzer.

Durant led the Nets with 28 points but also missed a potential game-winning 3-pointer with 3.8 seconds remaining and the game reached overtime when an alley-oop layup by Kenta Bates-Diop was short at the buzzer.

James Harden added 26 and his floater gave the Nets a 119-115 lead with 89 seconds left in overtime, but the Nets needed Thomas to come through as Lonnie Walker IV hit a layup and Dejounte Murray hit free throws to even the game at 119 with 46 seconds left.

After Walker stole the ball from Durant with 32.2 seconds left, Murray blew a layup with 26.6 seconds, giving the Nets a chance to finally win it.

Claxton collected 16 points and 14 rebounds for the Nets, who shot 48 percent but committed a season-worst 22 turnovers.

Walker scored a season-high 25 points and Murray added 19 for the Spurs, who are 1-6 in their past seven games. Bryn Forbes contributed 18 as San Antonio shot 43 percent.

After facing a seven-point deficit early in the second quarter, the Nets held a 60-51 lead at halftime. Durant’s 17-footer staked Brooklyn to an 84-71 led with 3:47 to go in the third but the lead was down to 91-89 entering the fourth.

The Nets appeared to seal it when Durant’s 13-footer made the score 113-103 with 4:01 remaining, but the Spurs scored 10 straight points and tied the game on Primo’s 3-pointer with 40.9 seconds left.