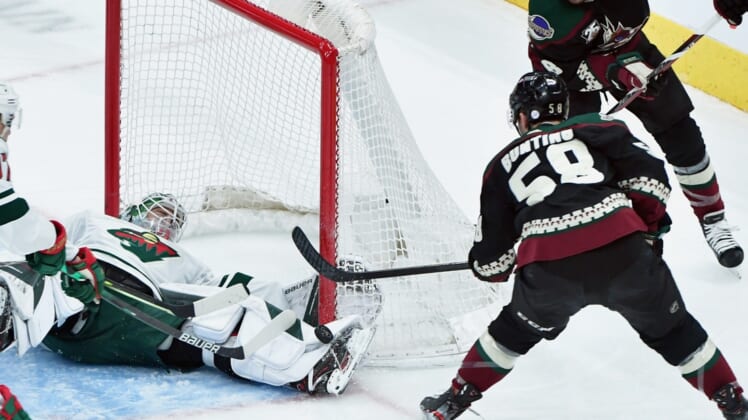 Marcus Foligno scored the tiebreaking goal early in the third period and goaltender Cam Talbot made 39 saves as the Minnesota Wild extended their winning streak to five games with a 4-1 victory against the host Arizona Coyotes on Wednesday night in Glendale, Ariz.

Christian Dvorak scored the lone goal for Arizona and Darcy Kuemper stopped 19 of 22 shots. The hosts were swept in the two-game series, also losing 5-2 to Minnesota on Monday.

Wednesday’s game was the last in the regular season between the teams. The Wild won seven of the eight meetings.

Foligno’s go-ahead goal came at 4:32 of the third. He took a pass from Joel Eriksson Ek and charged down the left wing, beating Kuemper from close range on a wrist shot just inside the near post.

The Coyotes dominated the opening few minutes, taking 10 of the game’s first 11 shots.

Arizona got the lone goal of the first period on the power play at 7:38, as Phil Kessel put the puck on net with two Coyotes out front and Dvorak was able to tip in the rebound.

The Wild tied the score at 2:58 of the second, taking advantage of a sloppy Arizona line change. Sturm carried the puck down the left wing and fired a pass across the top of the crease to Fiala, who put a backhander over a sprawling Kuemper.

The Coyotes played without forward Conor Garland, who has a team-leading 22 assists, because of a lower-body injury sustained in practice Tuesday.