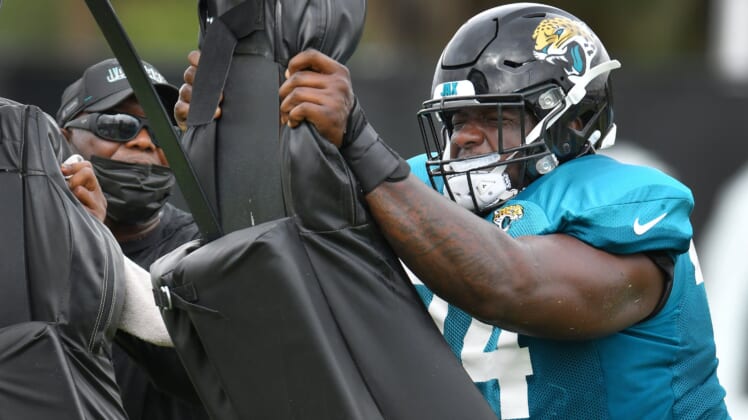 The Jacksonville Jaguars have raised some eyebrows this offseason thanks to a spending spree that’s no doubt added talent to their roster, but the question remains — At what cost? One of the initial moves that surprised many was the decision to place the franchise tag on left tackle Cam Robinson for the second consecutive season.

This move automatically ensured the five-year pro to receive a raise worth at least 15% more than his 2021-22 salary. That’s just how the NFL salary rules work for players who are franchise-tagged in back-to-back seasons.

Complicating matters is the fact that the Jags earned the No. 1 pick for the second year in a row. With Trevor Lawrence locked in as the franchise quarterback and no consensus top prospect, yet with several potential cornerstone blindside protectors available, many assumed the natural fit was to find their left tackle of the future via the top pick in the 2022 NFL Draft.

Not so fast, says general manager Trent Baalke. Instead of doing the obvious, he went and pulled a surprise, tagging Robinson once again, possibly hinting at the team’s plans on draft day. If that was a hint, this may be the announcement.

According to Ian Rapoport, the Jags have signed Robinson to a three-year extension worth a total of $54 million, or $18 million per year. Needless to say, this comes in a touch higher than his initial 15% raise called for and essentially ensures the Jags won’t be going left tackle on Thursday night. Or does it?

Cam Robinson signing may kiss idea of offense at No. 1 goodbye

Some suggest Baalke wants a pass-rusher, while others believe new head coach Doug Pederson would prefer one of those highly-touted left tackles like Evan Neal or Ikem Ekwonu.

That doesn’t appear to be the case at all, or if it is, Baalke couldn’t care less what his new head coach wants. Instead, the Jaguars appear to be hitching their cart to a few more years of Robinson leading the way in the Duval trenches.

While some analysts would be quick to suggest Robinson hasn’t played up to that contract status, having never reached a Pro Bowl in Jacksonville, across 856 snaps in 2021, Robinson committed just five penalties and allowed one sack according to Pro Football Focus. The hope is he can continue holding down Lawrence’s blindside through the 2024 season. This contract sets him up to do just that.

Still, don’t expect the intrigue on draft night to suddenly disappear, we’ve been surprised before, especially by the Jaguars. Does that mean a choice other than Aidan Hutchinson, or are they thinking past 2024, dreaming of building an impenetrable wall in front of their QB for the next 10-plus seasons? I guess we’ll all have to tune in Thursday night to find out.