Cam Newton preparing to start for Carolina Panthers vs. WFT

Cam Newton yells “I’m back!” after scoring a rushing touchdown against the Cardinals. Nfl Carolina Panthers At Arizona Cardinals

Cam Newton will practice like the starting quarterback this week for the Carolina Panthers, even though coach Matt Rhule stopped just short of naming him the starter for Sunday’s game against the Washington Football Team.

The Panthers signed Newton, 32, to a free-agent deal last week after putting quarterback Sam Darnold (shoulder) on injured reserve. It marked a return to Carolina for Newton, whom the franchise selected No. 1 overall in the 2011 draft.

He was released prior to the 2020 season and spent last season with the New England Patriots. This week in practice, Newton will take most of the first-team reps.

“He did a great job (Sunday) having 10 plays that he was kind of ready for,” Rhule said Monday about Newton’s appearance in Sunday’s 34-10 win over the Arizona Cardinals, a game started by quarterback PJ Walker. “We’ll start getting him ready. If he’s ready to start, great. 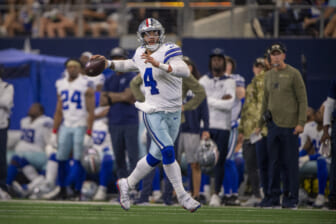 “If he’s not quite ready to do everything, obviously PJ’s available. It’s kind of that plan right now.”

Against the Cardinals, Newton was in the game for nine snaps. He was 3-of-4 passing for eight yards and ran three times for 14 yards. He threw for one touchdown and ran for another.

The coach of Sunday’s opponent is Ron Rivera, who spent nearly nine seasons as Newton’s coach.

“I haven’t communicated with him, but good for him,” Rivera said Friday. “It’s an opportunity to play where he started.”

Newton won the 2015 NFL MVP with the Panthers, the same season he and Rivera led the team to the Super Bowl, a 24-10 loss to the Denver Broncos.

The Panthers are 5-5 on the season, currently in possession of the No. 7 seed in the NFC. Washington is 3-6.