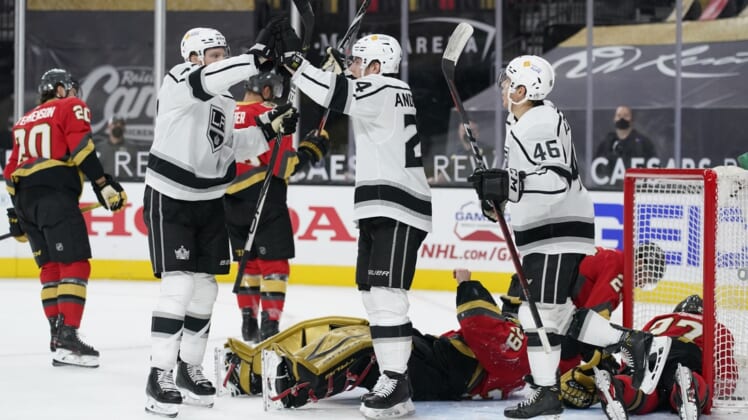 Calvin Petersen made 40 saves and Andreas Athanasiou had a goal and an assist as the Los Angeles Kings snapped a three-game losing streak with a 4-2 victory over the Vegas Golden Knights on Wednesday night in Las Vegas.

It was Petersen’s second victory in 10 days over Vegas, which had a six-game home winning streak snapped. On March 21 in Los Angeles, Petersen had 41 saves, including 23 in the third period, in a 3-1 victory over the Golden Knights.

Lias Andersson, Jaret Anderson-Dolan and Alex Iafallo also scored goals for the Kings, who moved within four points of fourth-place St. Louis for the final playoff spot in the West Division.

Shea Theodore had a goal and an assist and William Karlsson also scored for Vegas, which dropped out of first place in the West. Marc-Andre Fleury finished with 26 saves for the Golden Knights, who fell a point behind the Colorado Avalanche, a 9-3 winner over the Arizona Coyotes earlier Wednesday night.

Los Angeles jumped out to a 1-0 lead at the 1:58 mark of the first period. Athanasiou raced past William Carrier and Zach Whitecloud for Sean Walker’s bank pass off the glass and then backhanded a shot past Fleury for his seventh goal of the season.

Andersson made it 2-0 near the end of the period when he reached over Fleury to tap in a rebound of Tobias Bjornfot’s shot that had settled in the crease. It was his second goal of the season.

Karlsson cut it to 2-1 midway in the second period with his ninth goal of the season, banking in a sharp-angle rebound from the right goal line off Petersen’s leg.

Anderson-Dolan answered less than three minutes later with his fourth goal of the season, knocking in a rebound of an Athanasiou shot that Fleury lost track of in the crease.

Iafallo made it 4-1 when he eluded Fleury’s poke-check try and fired a wrist shot into the far corner at 16:12 of the second. He tallied his ninth goal of the season.

Vegas, after killing a five-minute major on Chandler Stephenson for elbowing Bjornfot in the head, cut it to 4-2 at the 3:36 mark of the third period. Theodore fired a shot from the left point through traffic past a screened Petersen for his sixth goal of the season.

Vegas pulled Fleury for an extra attacker with 1:50 remaining, and Petersen sealed the win with a pair of big saves on shots by Theodore and Alec Martinez.