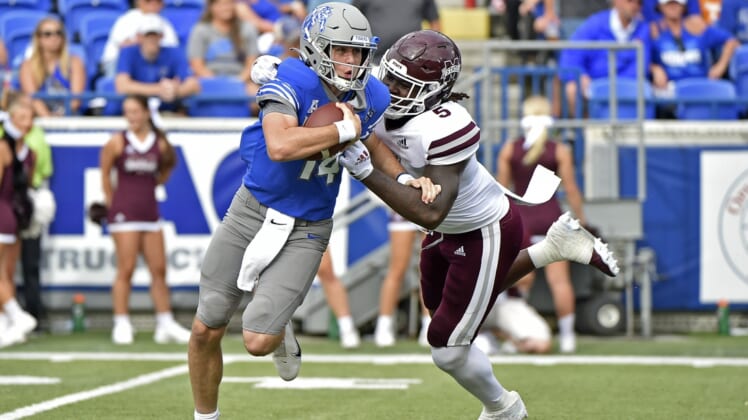 The Tigers couldn’t secure the win until Rogers’ attempt to run in a game-tying 2-point conversion with 1:32 left in the game came up short. Memphis recovered an onside kick and ran out the clock to improve to 3-0.

Rogers, who completed 50 of 67 passes, brought the Bulldogs (2-1) within two points on a 36-yard touchdown pass to Makai Polk. It was Rogers’ third scoring strike of the day.

But it wasn’t enough to outdo Austin, the Tigers’ most dangerous weapon on offense. He almost single-handedly erased a 17-7 halftime deficit with his scores in a 15 1/2-minute span of the second half.

Austin caught a 21-yard touchdown pass from Seth Henigan with 6:20 left in the third quarter, bringing Memphis within three points. Then he put the Tigers ahead for good with a 25-yard scoring grab at the 7:48 mark of the fourth quarter.

Just over two minutes later, Austin produced a 94-yard punt return for the Tigers’ second non-offensive touchdown of the game. They initiated scoring in the first quarter on a 49-yard fumble return by Sanchez Blake.

Austin finished with nine catches for 105 yards. He was outdone by Polk, who finished with a game-high 136 yards receiving on 11 grabs.

Trailing 7-0, Mississippi State controlled most of the remaining first half, rattling off 17 straight points. Second-quarter touchdowns on a 3-yard run by Dillon Johnson and Rogers’ 6-yard pass to Jaden Walley gave the Bulldogs a 10-point cushion.