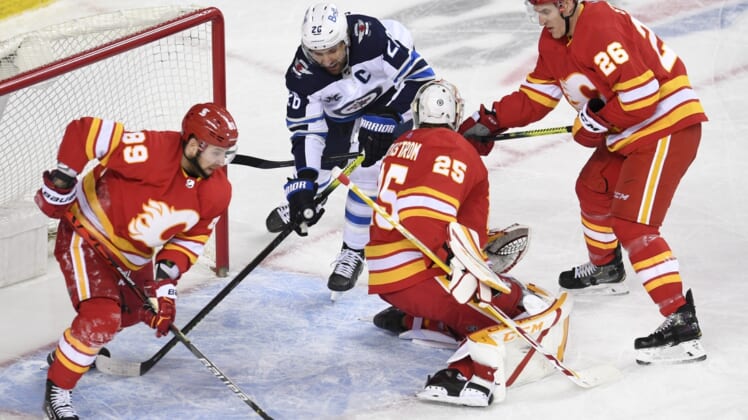 It has essentially reached last-gasp time for both the Calgary Flames and Vancouver Canucks when they meet in British Columbia on Wednesday.

Both teams sit outside of a playoff spot, four points back of the fourth-place Montreal Canadiens with less than two weeks before the April 12 trade deadline. Montreal also has five games in hand on both Calgary and Vancouver.

The Flames are coming off a 5-1 defeat at the hands of the host Winnipeg Jets on Monday, leaving Calgary with a 1-5-0 mark over the past six games.

Meanwhile, the Canucks have dropped their past three games (0-2-1). Vancouver has enjoyed some downtime since a 5-1 loss to the Jets one week ago, but like the Flames, will be assessing the future plans.

First and foremost, though, both teams would prefer to go on a lengthy winning streak and make the playoffs instead of worrying about who will be dealt away by the deadline.

“I’m just trying to focus on the team that we have,” Canucks captain Bo Horvat said. “That’s not, obviously, anybody in the room’s job to figure out what’s going to happen, but we want to win with this group that we have here.

“It’s a great group of guys we have, guys that want to win here. I feel like we’ve been playing really good hockey as of late, (but) it’s out of our hands what happens. We’ve just got to try to win hockey games.”

Among those caught in trade talks surrounding the Canucks include Tanner Pearson, Brandon Sutter, Jake Virtanen, Jimmy Vesey, Travis Boyd, Jordie Benn and Alexander Edler — who has a no-movement clause in his contract.

Certainly, the Canucks will be somewhat refreshed after a much-needed breather. They had a few days off before preparing in earnest for the coming stretch.

“Rest is first and foremost,” Vancouver coach Travis Green said. “You don’t want to go any more than that in the middle of a season. It was good to get back on the ice and the guys seemed refreshed. … There have been challenges for sure, and we talked about it at the beginning of the year. Probably more talk to it than we wished or wanted.”

The Flames, who have only a couple of pending unrestricted free agents, Derek Ryan and David Rittich, are doing their best to believe they can go on a miracle run.

Particularly frustrating for the Flames has been how they’ve been in close games, sometimes even ahead, but then lose. Adversity has been difficult to overcome.

“That falls on those players … that have to take a little more charge,” said Calgary coach Darryl Sutter after his team’s latest loss, a game in which they took an early lead but surrendered five unanswered goals.

“You know what? You could probably say that we probably out-chanced them, but their top players had better chances five-on-five than our top players, and they sealed the deal.”

All that said, there may be a wrench thrown in the clash. On Tuesday, Vancouver’s Adam Gaudette was practicing but was pulled after the team found out his COVID-19 test from the day before was positive.

He was tested again and results could impact his status as well as that of others. Virtanen missed Tuesday’s session because he was ill.