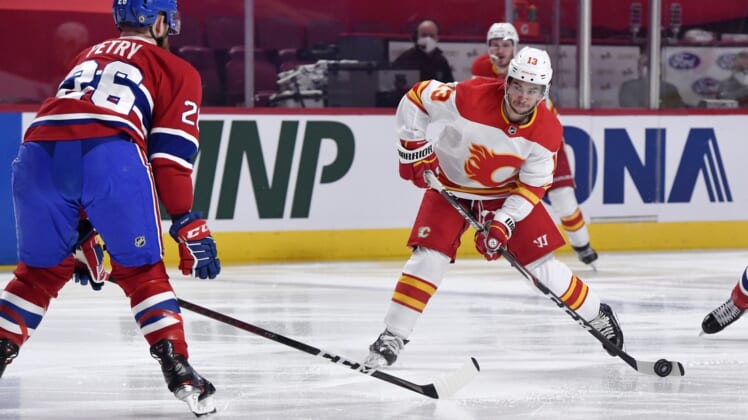 Mark Giordano collected one goal and one assist while goaltender Jacob Markstrom made 26 saves as the visiting Calgary Flames claimed a 4-1 victory over the Montreal Canadiens on Wednesday.

Noah Hanifin, Josh Leivo and Sean Monahan also scored for the Flames, who have won three straight games and pulled within four points of the Canadiens, who hold the fourth and final playoff position in the North Division.

Brett Kulak replied for the struggling Canadiens, who received a 30-save performance from Jake Allen. Montreal has just one win in five games (1-4-0). The Canadiens do have three games in hand on Calgary.

The clubs meet again on Friday in Montreal, and have three more clashes in Calgary later this month. The Flames have won four of their five meetings this season.

Hanifin gave the Flames an early boost when he opened the scoring four minutes into the clash. Mikael Backlund cleanly won a face-off in Montreal territory, pulling the puck to the point, and Hanifin blasted a slap shot that found the mark for his first goal in 14 games.

Giordano doubled the lead 29 seconds into the second period with his second goal in three outings. After taking a cross-ice pass from Chris Tanev at his point position, Giordano blasted a shot that made it through the screen.

Kulak gave the Canadiens a much-needed boost just past the midway point with his first goal of the season. Kulak was sprung by Jonathan Drouin for a breakaway, the defenseman wired a shot inside the post to snap a 95-game goal drought. It is Kulak’s first goal since March 28, 2019.

Leivo provided a much-needed insurance goal with 7:11 remaining in regulation. Leivo stole the puck from Shea Weber, held off a check and tucked a backhand into the cage for his fifth goal of the season.