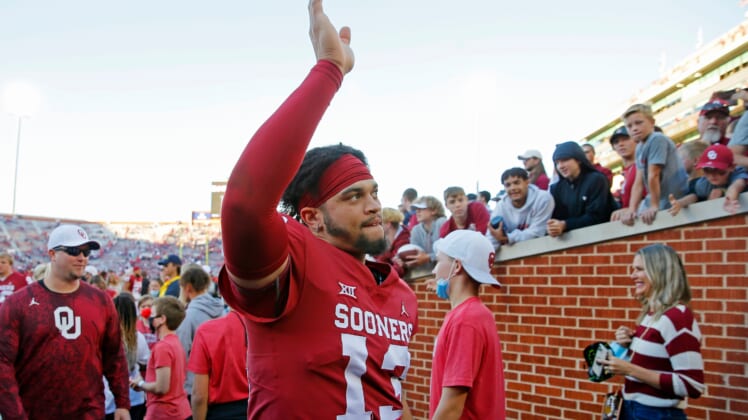 Caleb Williams is in the transfer portal, becoming the latest college football star to hit the open market looking for a better opportunity. With the top freshman quarterback now weighing his options, let’s examine where Williams will play in 2022.

The 6-foot-1 quarterback’s decision to enter the portal shouldn’t come as a surprise. A 247 Sports’ five-star recruit in 2021, Williams joined the Oklahoma Sooners because of Lincoln Riley. The moment Riley left to become one of the highest-paid college coaches at USC, an exit for his quarterback felt inevitable. 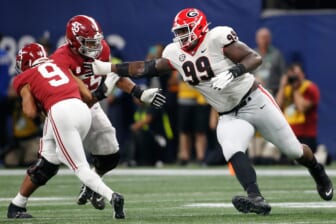 With that in mind, let’s examine the best Caleb Williams landing spots in 2022.

Before committing to Oklahoma, Caleb Williams’ father made it very clear the family wanted a coach who is great with quarterbacks. That will be a priority once again with this decision, but an opportunity to compete in the College Football Playoff will also be an important factor. If Williams is looking for a chance to join an explosive offense that can help him develop as an NFL prospect, Lane Kiffin can make a compelling pitch.

Williams can look at what Kiffin’s offense did for Matt Corral. A heralded four-star recruit in 2018, Corral struggled in his first real action as a redshirt freshman with the Rebels. He lost snaps to John Rhys Plumlee, now an offensive weapon for Ole Miss, and struggled to make an impact.

But everything clicked once Lane Kiffin arrived. The veteran coach’s scheme and ability to design an offense around his quarterback’s talents made a huge difference. He threw 29 touchdowns in 2020, completing 70.9% of his passes. As a Heisman candidate in 2021, Corral posted a strong 20-5 TD-INT ratio and scored 31 total touchdowns. Now, he’s a projected top-20 pick in the 2022 NFL Draft.

Ole Miss provides an exciting style of football in the SEC, the best level of competition to challenge Williams. He could take the Rebels to the next level, making them a CFP contender and clicking with Kiffin for two seasons before heading to the NFL.

It’s only fitting that USC stands out as a potential transfer destination for Caleb Williams. Riley convinced the Washington D.C. native to move Norman, Oklahoma all for the chance to become the next Kyler Murray. The recruiting pitch should be even easier with the opportunity to live in Los Angeles, where Williams can be a star on the field and cash in with NIL deals off it.

The transfer portal is college football’s free agency, it was inevitable. When evaluating landing spots for Williams, USC offers the strongest pitch. An established relationship with a top offensive-minded coach is a huge advantage in the Trojans’ favor. Pair that with the incoming offensive weapons in a talent-rich state and the program becomes even more appealing. Plus, Williams would become an icon in the city if he turns the Trojans into a championship contender.

On the surface, pairing Williams with Brian Kelly doesn’t seem like the perfect fit. This is the same coach who danced with a quarterback recruit at LSU with ‘”Callin’ Baton Rouge” playing in the background. Williams might also be put off by the lack of success from Kelly’s Notre Dame quarterbacks in the NFL. But this is an intriguing option for two reasons.

First, LSU offensive coordinator Mike Denbrock. At Cincinnati, he built a relationship with Desmond Ridder. Once a three-star recruit with very few offers to play quarterback, Ridder became one of the best passers in college football. In Denbrock’s offense the past two seasons, Ridder posted 5,630 passing yards with a 49-14 TD-INT ratio and a 156.2 passer rating. He now has a shot to be a first-round selection in the NFL Draft this offseason.

There are enticing possibilities for Williams in Denbrock’s offense. Next, factor in the state of Louisiana and the level of support the boosters and fans provide for the football program. Willams could become a legend in the state, potentially following in Joe Burrow’s path.

Georgia might be the favorite to land Caleb Williams. The Bulldogs are playing for the national championship and they reached this point with Stetson Bennett at quarterback. While he has performed fairly well this season (27-7 TD-INT ratio, 178.0 QB rating), he’s still a former walk-on with no NFL future. Williams would be a monumental quarterback upgrade for the Bulldogs.

Keep Georgia’s recruiting classes in mind. The Bulldogs pulled in two of the best offensive tackle prospects in the country in 2021 and their offensive line allowed one of the lowest sack rates in college football. That’s crucial in the SEC. Williams would also get to play with Brock Bowers (846 receiving yards, 12 touchdowns), who is receiving Rob Gronkowski comparisons. Sophomore receiver Jermaine Burton (19.5 ypc) also showed real promise this season.

If Williams wants to win a championship, Georgia is the place to go. Admittedly, Kirby Smart’s talent evaluation and decision-making at quarterback doesn’t seem to be the best (starting Jake Fromm over Justin Fields), but even he realizes the Bulldogs can be even better in 2022 with Williams running the offense. If the Bulldogs win the championship and land Williams, 2022 will be a year the state never forgets.