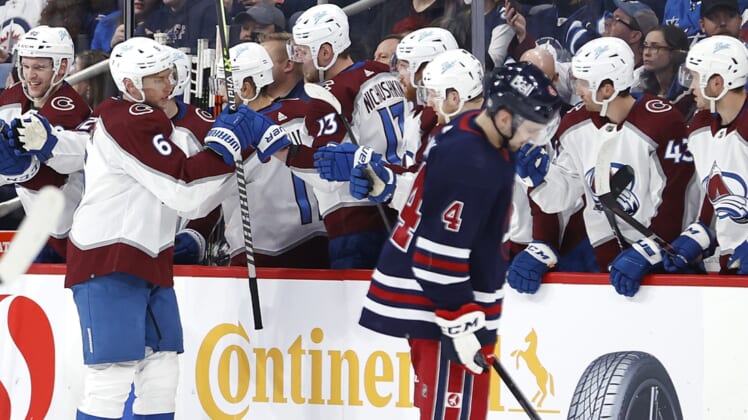 Cale Makar scored the winning goal in overtime to cap a two-point game that gave the league-leading Colorado Avalanche their fifth straight win with a 5-4 road victory over the Winnipeg Jets on Friday.

Andre Burakovsky and Nathan McKinnon also collected one goal and one assist, while Nicolas Aube-Kubel and Erik Johnson each scored once for the Avalanche (51-14-6, 108 points). Goaltender Pavel Francouz made 39 saves.

With Winnipeg’s Nikolaj Ehlers in the penalty box, Makar blasted a one-timer for the power-play tally at 2:42 of the overtime period for his 25th goal of the season, and a thrilling finish to a wild affair.

Ehlers and Mark Scheifele both scored twice in three-point games for the Jets (33-28-11, 77 points), who are on a four-game losing skid with their playoff hopes hanging in the balance. Goalie Connor Hellebuyck stopped 32 shots on a night his team erased a late two-goal deficit to force overtime.

Aube-Kubel’s ninth goal of the season opened the scoring at 5:10, coming when he sent the puck to the front of the net from the corner and it banked into the net off a defender’s skate.

Scheifele equaled the score five minutes later when he converted a perfect pass from Ehlers during a two-on-one rush, and then returned the favor when he intercepted a clearing attempt and fed a wide-open Ehlers in the slot, who converted a rebound attempt with 2:25 remaining in the opening frame.

Burakovsky’s 20th of the season four minutes into the second period tied the score again. His 20th of the season came when he used a defender as a screen to whip a wrist shot home. Then, Johnson notched his seventh of the year just before the midway point by burying a long shot to make it a 3-2 game.

MacKinnon doubled the Colorado lead four minutes into the third period by pouncing on a loose puck to net his 25th tally of the season on the rebound.

But the Jets cued the comeback.

Scheifele’s second of the game and 29th of the season came when he fired a shot as he raced to the slot. The goal brought the Jets within one with 3:35 remaining in regulation.

While on a final-minute power play, Ehlers scored during a wild scramble to net his 24th of the season with 15.6 seconds remaining in regulation.