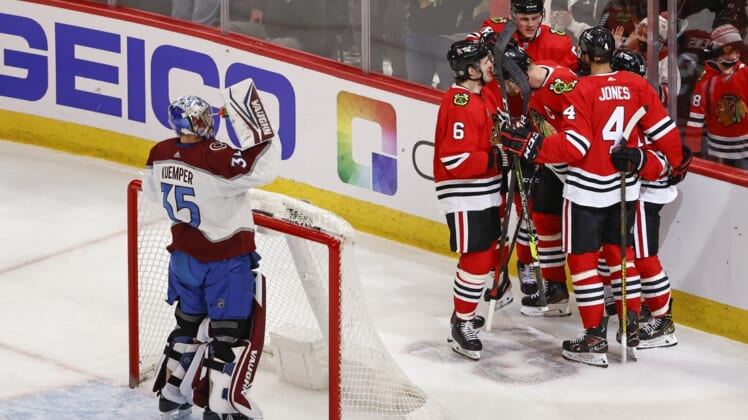 Cale Makar scored the game-winning goal 2:38 into overtime and Erik Johnson scored twice in regulation to boost the visiting Colorado Avalanche to a 4-3 victory over the Chicago Blackhawks on Tuesday night.

Alex DeBrincat scored power-play goals 40 seconds apart early in the third period to give Chicago a 3-2 lead, but the Blackhawks were unable to hold on and lost their fifth straight game.

Makar won the game with a nifty goal, circling behind the Chicago goal to the outside of the left circle before reversing course, switching to his backhand and scoring top-shelf on Blackhawks goaltender Marc-Andre Fleury.

Jonathan Toews had a scoring chance at the end of regulation for Chicago, but the shot glanced off the glove of Avalanche goalie Darcy Kuemper. Toews hit the post early in overtime, moments after Colorado hit the post.

Kuemper made 28 saves as the Avalanche won for the seventh time in eight games. Nazem Kadri added two assists.

Patrick Kane and Seth Jones had two assists apiece for the Blackhawks.

Chicago’s lone lead of the night was short-lived, as a shot by Johnson deflected off the stick of Blackhawks defenseman Jake McCabe and into the net with 8:16 remaining in regulation to tie the game at 3.

The Avalanche stormed to a 2-0 advantage after one period while outshooting the Blackhawks 14-5. Johnson opened the scoring at the 7:43 mark before Alex Newhook made it 2-0 about six minutes later.

Chicago outshot Colorado 17-7 in the second period while slashing the deficit in half. After MacKenzie Entwistle worked the puck toward the goal line, Toews jammed a loose puck past Kuemper at 4:47 of the second period.

Fleury returned to the crease after missing the past two games in the NHL’s COVID-19 protocol. He was cleared to return Sunday and served as the backup to rookie Arvid Soderblom during Sunday’s 5-1 home loss to the Calgary Flames.

Colorado has claimed the first two of four meetings with Chicago this season after winning 4-2 on home ice in the season opener on Oct. 13.