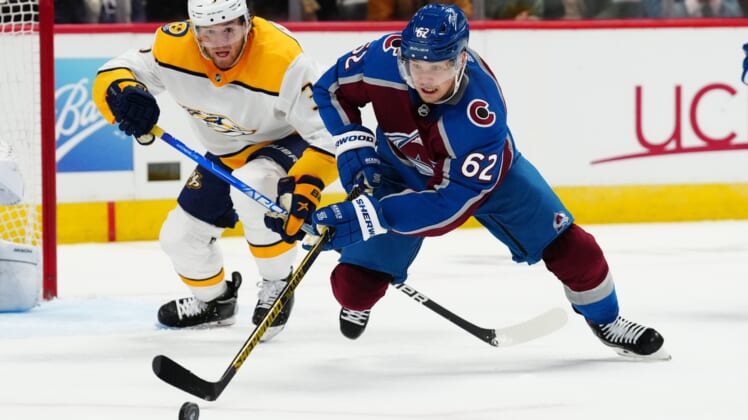 Cale Makar scored 8:31 into overtime and the Colorado Avalanche beat the Nashville Predators 2-1 on Thursday night in Denver to take a 2-0 lead in their Western Conference first-round playoff series.

Rookie goaltender Connor Ingram made a career-high 48 saves and Yakov Trenin scored for the Predators.

Game 3 is Saturday afternoon in Nashville.

The Avalanche held the Predators to 15 shots after the first period and dominated chances in the third period and overtime. Colorado finally solved Ingram in OT after Nico Sturm took a shot from near the left circle that Ingram saved. The rebound came to Makar in the slot, and his wrister gave the Avalanche a two-game edge in the series.

It was Makar’s second goal of the postseason.

After scoring seven goals in their Game 1 victory, the Avalanche found it tough to break through against Ingram. They didn’t get a shot on goal for more than five minutes to start the game but made the first one count.

MacKinnon picked up the puck at his own blue line, skated into the Nashville zone and beat Ingram with a shot to the short side at 5:25 of the opening period. It was his third goal of the series.

The Predators drew even later in the period. Roman Josi’s pass went through Colorado defenseman Samuel Girard to Trenin, who came in on Kuemper and beat him with a wrister at 15:19.

It was Trenin’s first goal of the playoffs.

The Avalanche held a 21-5 shots on goal advantage in the second period but couldn’t get one by Ingram. The hosts nearly scored in the final seconds of the period, but Valeri Nichushkin’s backhander was disallowed when the referee determined Artturi Lehkonen interfered with Ingram.

Colorado challenged the call, but it was upheld upon a review, and the Avalanche were assessed a minor penalty. Nichushkin then took a high sticking penalty off the opening faceoff of the third period, giving Nashville a five-on-three for 1:50. The Predators managed just one shot on goal on the two-man advantage.