WATCH: Cal rallies to force OT before falling to Washington 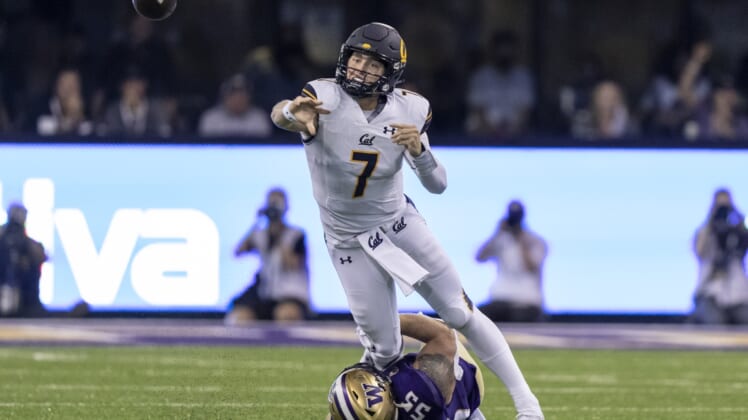 Sean McGrew scored his second touchdown of the game on a 2-yard run in overtime as Washington opened Pac-12 Conference play with a 31-24 victory against California on Saturday night in Seattle in the 100th meeting between the schools.

On California’s overtime possession, the Huskies’ Cameron Williams stripped running back Damien Moore of the ball at the 1-yard line, and linebacker Ryan Bowman recovered at the goal line to end the game.

Dylan Morris completed 19 of 32 passes for 234 yards and two touchdowns for the Huskies (2-2), who have won two straight. McGrew rushed 16 times for 53 yards.

The Huskies overcame an outstanding effort from Cal quarterback Chase Garbers, who rallied the Golden Bears (1-3) from a 14-point deficit to force overtime.

Garbers completed 30 of 41 passes for 319 yards and two touchdowns against a defense that entered the game ranked second nationally in pass efficiency defense. Garbers also rushed for a game-high 71 yards and a score on 16 carries.

Garbers scored on a 7-yard run up the middle on a third-and-6 play with 2:51 remaining in the fourth quarter to tie it at 24-all.

He nearly drove Cal to a winning field goal in the final seconds of regulation, but Dario Longhetto’s 55-yard attempt fell just short on the last play.

Morris threw a 19-yard touchdown pass to Taj Davis and a 6-yarder to Jalen McMillan, and McGrew scored on a 5-yard run to give the Huskies a 21-7 lead with 1:27 left in the first half.

Longhetto kicked a 29-yarder on the final play of the half to pull the Bears within 21-10.

The Huskies’ Peyton Henry kicked a 32-yard field goal midway through the third quarter to make it 24-10 before the Cal defense stiffened.

Moore scored on a 26-yard screen pass from Garbers to pull the Bears within 24-17 with 5:09 left in the third.