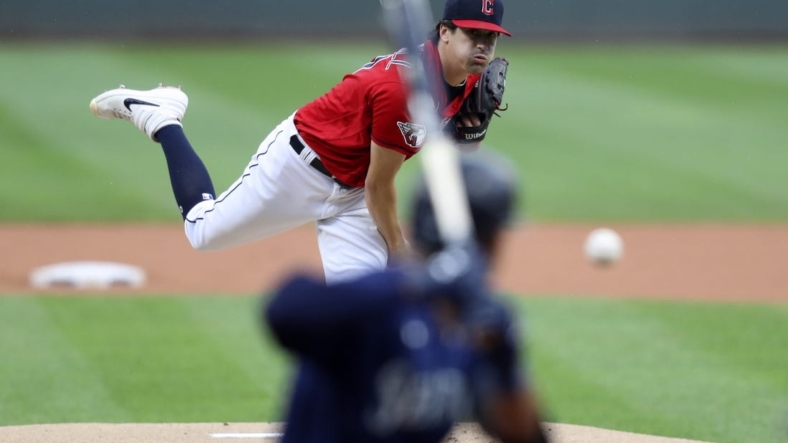 Cal Raleigh hit a two-run homer in the 11th inning to help the visiting Seattle Mariners to a 6-3 win against the Cleveland Guardians and complete a three-game sweep on Sunday.

Julio Rodriguez had four hits, including a solo home run, and scored twice for Seattle, which has won seven in a row.

The series finale took more than eight hours to complete due to a rain delay of just over 4 1/2 hours.

Mariners rookie right-hander George Kirby allowed one run and three hits in three innings before the rain ended his day.

Matthew Boyd (1-0) pitched the 10th to earn the win, and Chris Flexen pitched the 11th for his second save for Seattle.

Josh Naylor had two hits and an RBI for the Guardians, who have lost five straight to fall into a tie for first in the AL Central with the Minnesota Twins.

Neither team scored in the 10th, and Trevor Stephan (4-4) started the 11th for the Guardians with Eugenio Suarez on second.

J.P. Crawford delivered an RBI single for a 4-3 lead before Raleigh homered over the right field fence, his 22nd bomb of the season, to make it 6-3.

The Mariners put their first two batters on base in the fourth when the rain delay began.

When play resumed, Sam Hentges took over on the mound for the Guardians and hit Adam Frazier with a pitch to load the bases. Crawford hit into a double play, but a run scored to extend the lead to 3-1.

The Indians scored a run in the seventh and another in the eighth to tie the score 3-3.

Andres Gimenez walked to start the seventh, stole second, went to third on a ground out and scored an infield single by Austin Hedges.

Amed Rosario singled to start the eighth, stole second and went to third on an error on the catcher. He then scored on a two-out single by Oscar Gonzalez to knot the score.

Ty France gave the Mariners a 1-0 lead with an RBI double in the first.

The Guardians, who had combined for one run in their previous four games, scored in the bottom of the first to tie the score 1-1.

Jose Ramirez reached on a two-out infield single and scored on a double into the right-center field gap by Naylor.

Rodriguez went deep in the third, his 23rd of the season, to move the Mariners back in front 2-1.