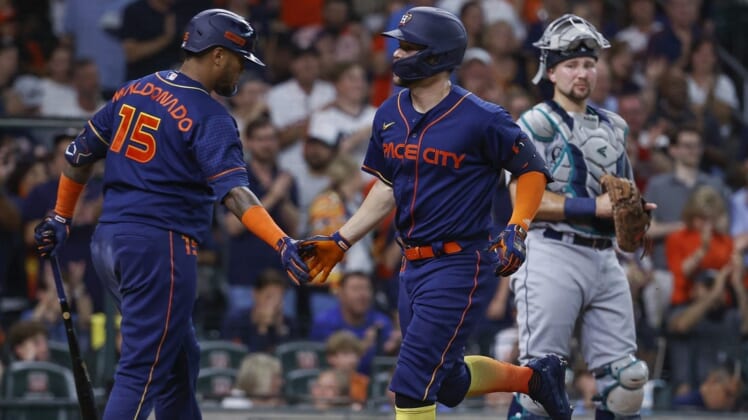 Cal Raleigh produced his third multi-hit game of the year and drove in a career-high four runs as the visiting Seattle Mariners beat the Houston Astros 7-4 on Monday.

Raleigh smacked a three-run homer in the second inning and added a run-scoring single in the fourth to pace the Mariners, who entered Monday having won three consecutive series. Raleigh, batting in the No. 9 spot, finished 2-for-4 for his second multi-hit game of the current road trip.

Astros starter Cristian Javier (3-3) struggled throughout his abbreviated start. He allowed five runs on six hits and one walk with four strikeouts over 3 2/3 innings.

The right-hander retired the Mariners in order only once, doing so in the third inning. But Javier failed to complete the fourth after surrendering consecutive two-out singles, with Raleigh’s single plating Adam Frazier, who opened the frame with a double to right-center, to snap a 4-4 deadlock.

Following a benches-clearing dustup in the ninth, Seattle rookie Julio Rodriguez smacked his seventh home run the opposite way to right, a two-run shot that scored Ty France and provided insurance.

Astros reliever Hector Neris, who hit France with a pitch, prompting the dugouts to clear, and Houston manager Dusty Baker were ejected in the ninth.

Raleigh snapped a 1-all tie with his sixth home run, a 364-shot to right field that drove home Frazier and Dylan Moore in the second. Seattle fashioned a two-out rally in the first when J.P Crawford followed a Rodriguez single and a wild pitch with an RBI double to left.

Before Raleigh delivered the Mariners the lead for good, Houston fashioned a response to each Seattle tally. Jose Altuve cranked his 11th home run overall and sixth leadoff homer this season to pull the Astros even in the first. It was his 175th career home run, breaking a tie with George Springer for the fifth most in club history.

Houston added a pair of solo homers as part of its three-run second, with Kyle Tucker and Chas McCormick blasting their 10th and sixth home runs, respectively. Altuve added an RBI single that plated Martin Maldonado to knot the score at 4-4 but was erased trying to stretch the hit to a double.

Altuve was thrown out at the plate in the fourth when he tried to score from first on a one-out, Michael Brantley double. That helped bail out Seattle left-hander Robbie Ray (5-6), who gave up four runs (three earned) on eight hits and three walks with three strikeouts over five innings.

Four Seattle relievers kept the Astros, who finished 1-for-9 with runners in scoring position, at bay over the final four innings. Diego Castillo pitched around a ninth-inning walk for his third save.

Right fielder Moore had both outfield assists for the Mariners.

The Astros had won six of their previous seven games.