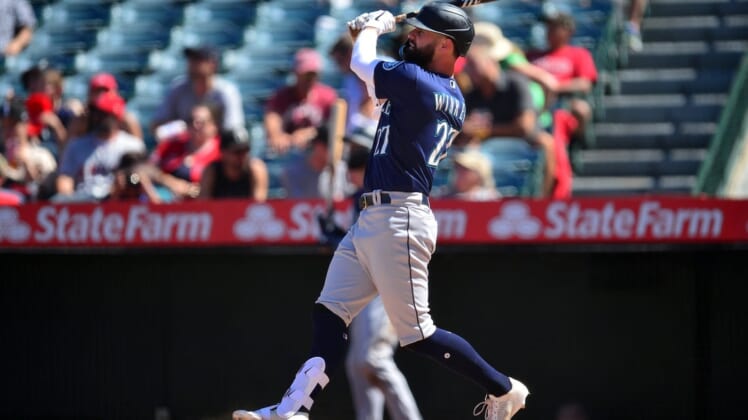 The Angels’ Shohei Ohtani, the reigning American League MVP, hit a two-run shot to center field in the bottom of the ninth inning. Ohtani, who also had a triple, went 4 for 5 with four RBIs.

The Mariners, who lead the AL’s wild-card race, improved to 4-2 on their nine-game trip, which concludes with three games at last-place Oakland starting Friday.

Right-hander George Kirby (5-3) got the victory, allowing three runs on six hits in 5 2/3 innings. The rookie walked one and struck out seven.

Raleigh hit a solo shot in the fifth inning to give the Mariners a 7-1 lead and added a two-run homer in the ninth. His 18 home runs this season are the most in the majors by a catcher.

The Mariners broke a scoreless tie with four runs in the third, thanks in large part to three walks, one to J.P. Crawford with the bases loaded, and a hit batter. Mitch Haniger hit a run-scoring single and Carlos Santana added a two-run single.

The Angels got a run back in the bottom of the inning as Andrew Velazquez led off with a single, stole second and scored on David Fletcher’s bloop down the right-field line.

Haniger led off the fifth with a single and Suarez followed with a two-run homer to right-center, his team-leading 20th of the season. Two outs later, Raleigh went deep.

The Angels put together a two-out rally in the bottom of the inning. Magneuris Sierra singled, took second on an error and, after Fletcher was hit by a pitch, Ohtani hit a run-scoring single and Luis Rengifo made it 7-3 with a double.

After Frazier led off the sixth with a single, One out later, Winker hit a two-run shot to right to extend the lead. It was Winker’s 13th blast of the season.

Fletcher led off the bottom of the seventh with a single and scored on Ohtani’s triple. Taylor Ward’s one-out sacrifice fly made it 9-5.