Cal Quantrill pitches Guardians past Rangers in opener of DH 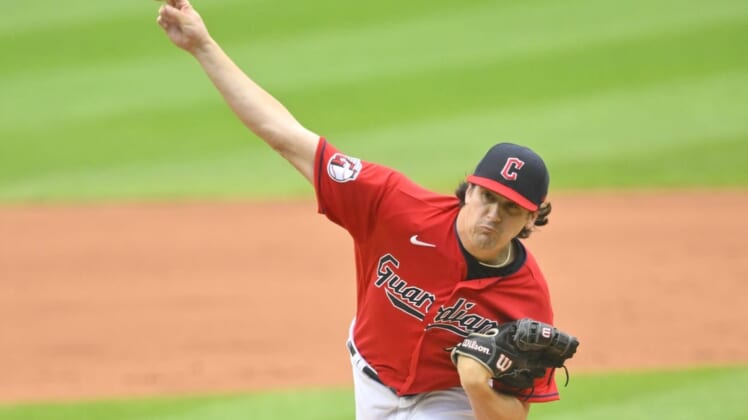 Cal Quantrill won his second consecutive start and the Cleveland Guardians reached the .500 mark on Tuesday with a 6-3 victory in Game 1 of a doubleheader over the visiting Texas Rangers.

The right-hander improved to 3-3 on the season with an ERA of 3.56. He pitched seven innings and allowed three runs, eight hits and one walk. He struck out three.

There was a 1-hour, 19-minute rain delay before the game.

The Rangers have lost five of their last six games.

Closer Emmanuel Clase earned his 10th save with a hitless ninth.

Straw also made a sliding catch in the sixth inning that saved one or possibly two runs with a drive off the bat of Texas’ Nathaniel Lowe. There were two runners on base at the time.

The Guardians scored an important insurance run in the seventh when pinch-runner Oscar Mercado scored from second on an infield grounder by Andres Jimenez. Rangers shortstop Marcus Semien bobbled the grounder, but Jimenez was credited with an RBI single for a 6-3 lead.

Rangers rookie Steele Walker’s first major-league hit was a 349-foot homer into the bleachers in right to lead off the seventh.

One out later, Semien followed with a homer over the left-field wall, an estimated 350 feet from home plate. His fourth long ball of the season narrowed Texas’ deficit to 5-3.

The Rangers have now hit home runs in 10 consecutive games.

The Guardians jumped all over losing pitcher Jon Gray (1-3) in the third inning. Owen Miller struck first with a two-run single that scored Straw and Rosario.

Josh Naylor and Oscar Gonzalez followed with run-scoring doubles to cap Cleveland’s four-run uprising. It handed the Guardians a 5-1 advantage.

Gonzalez has hit safely in nine of his 10 major-league games.

The Rangers struck first in the top of the first. Semien came home on a fielder’s choice by Kole Calhoun for a 1-0 lead.

Cleveland knotted the score at 1-1 in the second when Naylor walked and later scored on Steven Kwan’s sacrifice fly.