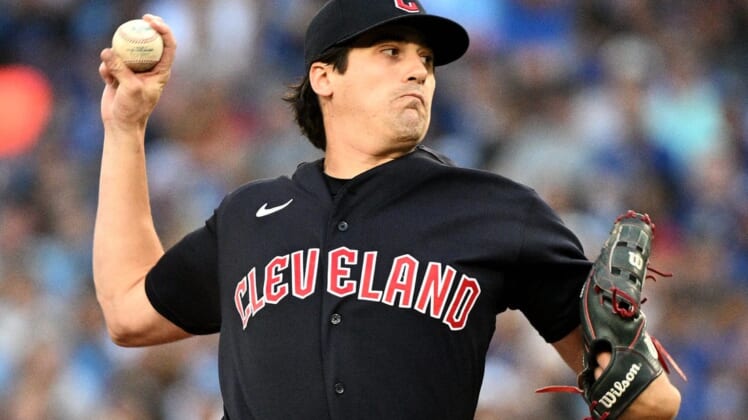 Cal Quantrill hasn’t allowed a run in his past two starts. The Cleveland Guardians right-hander will try to keep the streak going when he faces the visiting Detroit Tigers in the finale of a four-game series on Wednesday.

Quantrill (9-5, 3.67 ERA) limited the Houston Astros to three hits in six innings on Aug. 6. He was even better on Friday, giving up one hit and no walks in seven innings at Toronto. He also matched his season high with seven strikeouts against the Blue Jays.

“It’s nice when you’re in the middle of August and a guy looks like his last pitch was as good as his first one,” Cleveland manager Terry Francona said. “It sure looked like he wasn’t too worried with anything other than pitching.”

Quantrill started twice against Detroit last month, going 1-1 with a 2.70 ERA. In his most recent outing against the Tigers, he fired six scoreless innings on July 16. In seven career appearances vs. Detroit, including four starts, Quantrill is 2-2 with a 2.73 ERA.

He will be opposed by Daniel Norris (0-4, 5.97 ERA), who will be making his second start for Detroit since he rejoined the organization on a minor league contract last month. The left-hander was designated for assignment by the Chicago Cubs, and the Tigers, depleted by a spate of pitching injuries, brought him back for a second stint.

Norris, who pitched for Detroit from 2015-21, held the Chicago White Sox scoreless for 4 2/3 innings on Friday.

“I told him on the mound when I took him out that I was proud of him,” manager A.J. Hinch said. “It’s not an easy task to come back to an old team as a new team and then facing an all right-handed lineup. But he just continued to put up zeros. He had good stuff.”

Norris disagreed somewhat, saying he had to battle through the outing, which was his third major league start over the past three years.

“I definitely didn’t have my best stuff, but no matter how you are feeling — a little jittery or whatever — just compete every pitch,” Norris said. “I felt like I did a good job of that. No matter what I threw, I threw it with conviction.

“There were nerves, totally. I’m not going to BS you. There were a lot of emotions, but I just tried to lock in and compete. Maybe I didn’t feel the best, but I had a lot of fun competing.”

The Tigers ended an eight-game losing streak by defeating the Guardians in the second game of a doubleheader on Monday. Detroit then held off Cleveland 4-3 on Tuesday.

The Guardians had a runner on third with one out in the ninth inning, but Gregory Soto struck out Myles Straw and got Steven Kwan to ground out to earn his 22nd save.

“Just an all-around pretty good game,” Hinch said. “We made a mistake or two, we leave some guys on base, but to win a one-run game against a good club, it’s pretty rewarding.”

Tigers rookie Kerry Carpenter hit his first major league homer on Monday, then blasted another in the first inning on Tuesday.

The Guardians were frustrated by a couple of calls that didn’t go their way. Francona was ejected in the ninth for arguing over Straw’s foul tip. The umpires huddled and deemed that catcher Tucker Barnhart caught it for strike three.

“I thought he (the plate umpire) called foul ball,” Francona said. “That’s what I was arguing because I can’t imagine that (the other umpires) could overturn it from where they were.”