Cal Clutterbuck, Isles commit to future ahead of tilt with Senators 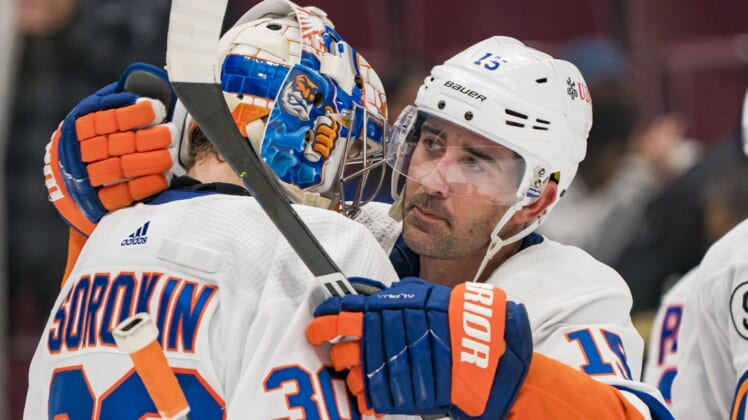 For Cal Clutterbuck, the sight of Jack Capuano and Travis Hamonic on the Ottawa Senators’ bench Tuesday night will be a reminder of how long he’s been a member of the New York Islanders.

The sight of Clutterbuck still manning the right side of the Islanders’ fourth line will also be a reminder than an era that began with Capuano as Clutterbuck’s head coach and Hamonic as one of his teammates isn’t quite over on Long Island.

The Islanders will look to continue building momentum for next season when they host the Senators in Elmont, N.Y., in the final game of the season between the Eastern Conference foes.

The Islanders, who made the NHL semifinals each of the last two seasons, will enter Tuesday 19 points behind the Washington Capitals in the race for the final wild card spot in the Eastern Conference. New York’s playoff hopes took an irrecoverable hit during an 11-game losing streak (0-8-3) from Nov. 7 through Dec. 5, which began at the close of a franchise-record 13-game road trip and included a team-wide COVID-19 outbreak.

But the Islanders’ recent solid play seems to have convinced general manager Lou Lamoriello — who referenced “all the turbulence that we went through” during a press conference Monday shortly after the NHL’s trade deadline passed — to not only stand pat but reinvest in the club’s core with an eye on competing again for the Stanley Cup next season.

Clutterbuck and Zach Parise, each of whom were eligible for free agency after the season, signed extensions Monday, with Clutterbuck inking a two-year deal and Parise agreeing to terms through next season.

“We believe in the group the same way Lou believes in the group,” said Clutterbuck, who joined the Islanders via a trade from the Minnesota Wild in the summer of 2013 and has been a part of four Islanders teams that advanced beyond the first round of the playoffs. “The feeling that I have with this group of guys is something that you don’t really find often. It’s an opportunity for us to go out there and accomplish the ultimate goal.”

Both New York and Ottawa absorbed road defeats in their most recent outings. The Islanders’ six-game point streak (5-0-1) ended Sunday afternoon with a 2-1 loss to the Philadelphia Flyers. The Senators fell for the fourth time in five games Saturday, when they lost to the Montreal Canadiens 5-1.

Even with the loss Sunday, the Islanders are in the midst of one of their best stretches of their trying season. New York in 6-2-1 in last nine games dating back to March 5 after winning just six games in a 17-game span (6-9-2) from Jan. 25 through March 3.

The Senators, who are on pace to miss the playoffs for the fifth straight season and whose 49 points entering Monday are tied for the fourth-fewest in the NHL, were far busier in making five moves between Sunday and Monday. Ottawa acquired Hamonic — a defenseman who spent his first seven NHL seasons with the Islanders, where his head coach was current Senators associate coach Capuano — as well as forwards Mathieu Joseph and Zach Senyshyn and goalie Michael McNiven.

But the Senators also dealt away forward Nick Paul to the Tampa Bay Lightning, forward Zach Sanford to the Winnipeg Jets and defenseman Josh Brown to the Boston Bruins.

The Senators also signed goalie Anton Forsberg to a three-year extension Monday. Forsberg is 14-12-2 for Ottawa, whose other goalies have combined to go 8-23-3 this season.