Cal Baptist fends off Washington’s rallies in second half 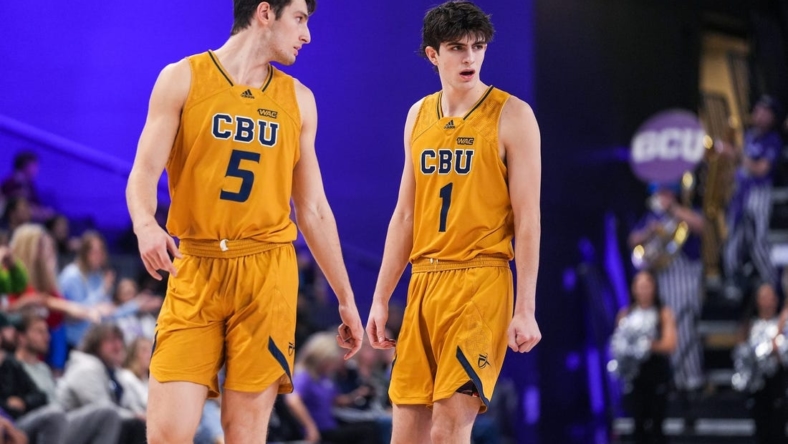 Taran Armstrong made several key plays down the stretch to finish with 18 points and six assists, Joe Quintana added 17 points, and Cal Baptist answered every rally attempt to hand host Washington its first loss of the season, 73-64, Thursday in Seattle.

The Lancers (3-1) jumped out to a 33-26 lead by halftime thanks to stifling defense. Cal Baptist limited Washington to just 10-of-31 shooting from the floor before intermission, which the visitors used to keep the Huskies at bay for the second 20 minutes.

The Lancers’ lead reached 12 points in the second half, and it never dipped below four. Cal Baptist had a response for each Washington rally effort, including holding the Huskies scoreless for 2:21 during a critical stretch late.

That stretch proved vital, as Cal Baptist endured its own scoring drought of more than four minutes during the same span.

Timothy Ighoefe ended the Lancers’ dry spell with 4:50 remaining on the first of back-to-back dunks, both assisted by Armstrong.

Armstrong then delivered a pivotal run, scoring all six points of a 6-0 Cal Baptist that pushed its lead to 11. Armstrong converted a three-point play, then hit his only 3-point attempt of the night.

That push effectively put the game for the Lancers.

The Lancers shot a 7-of-16 night overall from long range, including 3-of-8 for Quintana. Ighoefe kept his field-goal shooting limited near the basket, which proved effective: He finished 5-of-6 from the floor for 10 points to go with 11 rebounds.

Franck Kepnang led Washington (3-1) with 14 points on 6-of-9 shooting from the floor. Keion Brooks Jr. and PJ Fuller II each scored 11 points, but Fuller was limited in the second half after committing three fouls in less than four minutes out of the locker room.

Fuller eventually fouled out, scoring seven of his 11 in the first half.