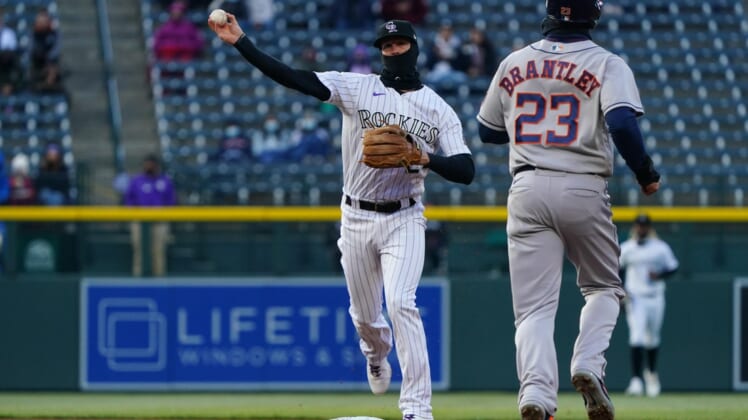 Jon Gray pitched strong into the seventh inning to help Colorado to just its second win in 10 games.

Michael Brantley had three hits, Carlos Correa had an RBI double and also scored and Aledmys Diaz had a run-scoring double for Houston. The Astros have lost eight of their last nine.

The cool night helped the starting pitchers, who didn’t have much traffic to deal with. Gray allowed just one hit through the first five innings, a single to Brantley and walked just two.

Houston struck first when Brantley reached on a one-out single and scored on Correa’s double down the right field line to make it 1-0 in the top of the sixth.

He walked Raimel Tapia to lead off the inning but battled back from a 3-0 count to get Ryan McMahon to ground into a double play. Story singled and Blackmon was hit by a pitch to put runners at first and second. Bryan Abreu relieved Garcia and Cron hit a two-run double to center field to give the Rockies the lead.

Gray walked Yuli Gurriel to start the seventh, got Diaz to ground into a double play but left after walking Martin Maldonado.

Nunez gave Colorado some cushion when he crushed a one-out homer to right-center off Ryne Stanek in the seventh. It was his fourth of the season.

Cron’s three-run homer with two outs in the eighth — his first of the season — iced it for the Rockies. Diaz’s two-out double in the ninth drove in Correa from first.