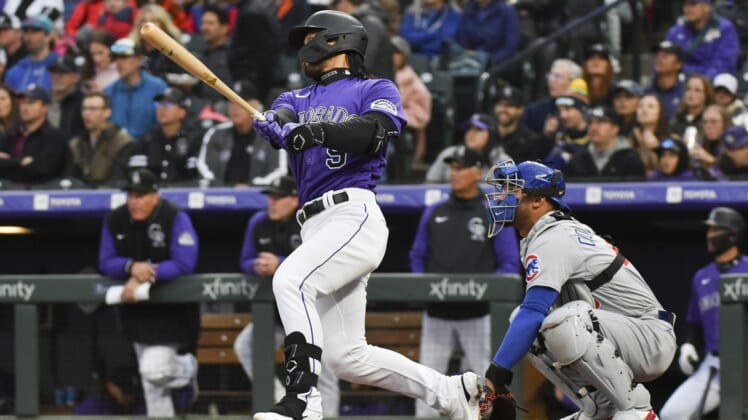 Antonio Senzatela (1-0) allowed one run on seven hits in five innings, and Daniel Bard picked up his fourth save.

Cubs starter Mark Leiter Jr. (0-1) allowed seven runs on five hits and walked four in his first game since 2018. He struck out four.

Chicago scored first, using three singles and a sacrifice bunt to bring home Wisdom and make it 1-0. The Rockies responded in the bottom of the third and took control of the game.

Dom Nunez started the rally with a one-out walk, and Joe followed with a triple to center to tie the game. After Blackmon walked, Kris Bryant brought home Joe with a force-out. Cron then hit a 466-foot homer to left-center field to make it 4-1.

Colorado padded its lead in the fourth. Brendan Rodgers led off with an infield single, Sam Hilliard walked and Trejo singled to drive in Rodgers and move Hilliard to third.

Nunez made it 6-1 with a sacrifice fly and after Joe walked, Jesse Chavez relieved Leiter. Blackmon hit his first pitch for an RBI single Bryant grounded into a double play.

The Rockies made it 8-1 in the fifth on singles by Ryan McMahon, Hilliard and Trejo.

The Cubs got four back in the seventh off Jhoulys Chacin. Suzuki and Heyward led off with singles and came home on a double by Wisdom. Nico Hoerner reached on an error, and both runners moved up on a groundout. Villar made it 8-5 with a two-run single to right.

Cron led off the bottom of the seventh with his second homer of the night and fifth of the season, but Heyward’s RBI triple in the eight made it a three-run game again.