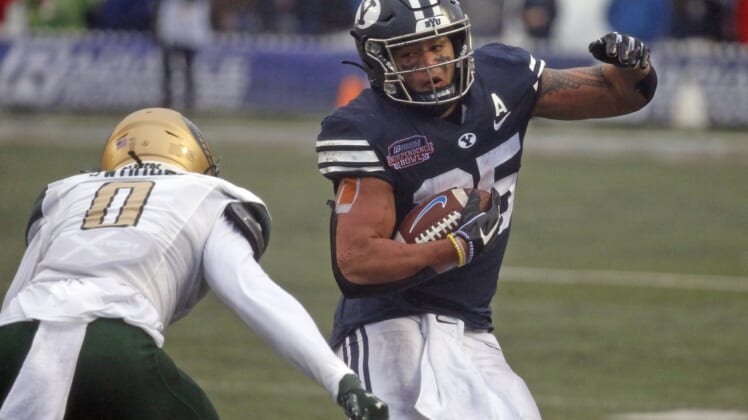 BYU running back Ty Allgeier, who co-led the nation in rushing touchdowns in 2021, said Tuesday he’s entering the NFL draft.

He had 23 touchdowns and ran for 1,601 yards on the season, setting a school yardage record that was good enough for fourth in the nation. He started his BYU career as a linebacker.

“I came to BYU in 2018 as a walk-on, ready to challenge the doubters and hungry to prove that I belonged,” Allgeier wrote Tuesday in a lengthy statement posted to Twitter. “Four years later, after switching positions and earning my scholarship, I have achieved my football goals at BYU and believe that I am ready for the next challenge.

“After much thought, consideration and prayer, I will be pursuing my life-long dream of playing in the NFL.”

Allgeier carried the ball 276 times on the season for an average of 5.8 yards per carry. The redshirt junior ends his Cougars career with 2,899 total rushing yards and 36 touchdowns. He added 437 receiving yards and a touchdown.

His final game for BYU came Dec. 18 in the Independence Bowl, which the Cougars lost 31-28 to UAB, and it was a memorable one. He gained 192 yards on 27 carries (7.11 yards average) and scored three touchdowns.